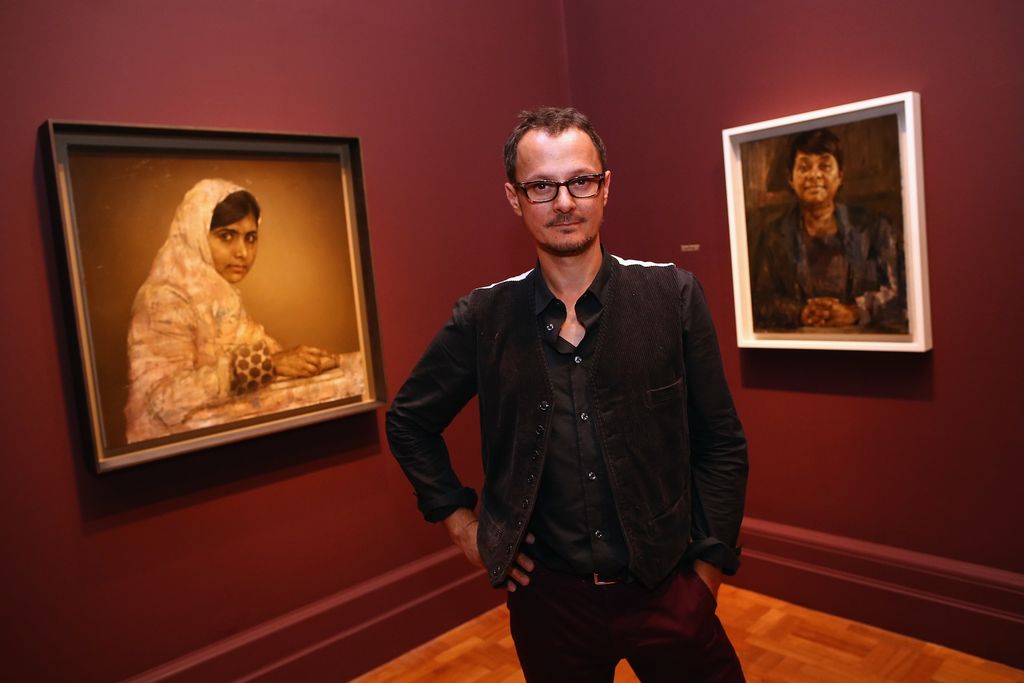 GETTING TO KNOW YEO

With a distinctive style and a knack for getting the real character of his portraits, artist Jonathan Yeo tells Hamish Jenkinson his own story

It’s a full house at the Ivy Club in London. The crowd have gathered for Sunday Wise, founded, and hosted by one of last issue’s contributors Hamish Jenkinson. It’s a bit like a relaxed chat show, though not on national television yet, with guests from across the creative industries, business, and politics.

It’s part of a growing trend that satisfies ambitious and curious young professionals who are increasingly spending their time and money looking to combine entertainment with learning, and from disconnected topics, leaving them to join the dots, and consider new perspectives themselves.

Amongst the impressive guests is Jonathan Yeo, a portrait painter from London. He has painted some of the most influential leaders in global politics and the arts, and at the end of last year had a solo show at the National Portrait Gallery in London, confirming him as one of the foremost living portrait artists in the world.

While interviewed by Jenkinson it is surprising to learn that Yeo didn’t go to art school and hadn’t even originally planned to become an artist. It’s a story he has told several times before, and neither hides from nor particularly trades off. It doesn’t necessarily set him apart from other great artists throughout history, many of whom were not classically trained, but his circumstances do make for an intriguing story.

At the age of about 22, he nonchalantly forgets, he was diagnosed with Hodgkin’s disease, “I got very ill and had chemotherapy, and radiotherapy. When you’re ill, especially when you’re very ill,
people want to try and make you happy rather than less happy and it was great to have people saying, “Yeah, of course, anything you want, great idea.” That made it easier to get through that first year or two of painting as a living, which anyone who’s tried will know is the hardest time. That’s when most people would give up and go and get a proper job since that’s the most logical thing to do.”

It’s a story that is very reminiscent of Steve Jobs, whose advice “live each day as if it was your last,” is so often passed around. Yeo was faced with a rare, incredibly scary circumstance where his life was turned upside down. It was natural for him to spend his time doing what he loved. However, comparisons with Jobs do have their limits, he certainly doesn’t seem to have the fiery temper of the late tech entrepreneur.

Without training and at a time when few were interested in portrait painting, it was particularly bold to make that decision. “There was no clear reason why I should go into the art business, no one really wanted that kind of painting, I wasn’t really good at it, and no one was supporting it.” Despite this Yeo’s work was well received, “People react to portraits. They feel like they can make valued judgments about portraits in a way they wouldn’t dare to about more conceptual ideas. They’d say whether they looked like them or not or represents them, it’s always very accessible.”

“I got a commission to do from a friend of the family, Trevor Huddleston, a massive anti-apartheid campaigner during the 50s and 60s, and he was getting old. The painting turned out a lot better than expected. It was seen just widely enough for me to get a bit more work, and it just kept going from there. That was the start. The important thing is you need your work to be seen, you need to be out there, and give people something they can talk about.”

As he had grown up in politics he was used to being around people that anyone else might be either shy and intimidated or even frustrated around, “It probably helped that I grew up around politics and wasn’t intimidated by them, but didn’t see them as evil either.” He was eventually made the first ever ‘election artist’ in 2001 and painted Tony Blair amongst many others. He focused on painting people the way they really were rather than reflecting the pose they made and the image they wanted everyone to see.“When you are doing a portrait, you’re looking at them and interpreting them, the best portraits are really the ones where you get people to relax and not think about being looked at and being analysed.”

“When I was younger you used to hear the mantra, ‘the camera never lies,’ about photography. Photography is something you could trust, whilst painting was inevitably romanticising, fantasising, exaggerating and that’s changing round a bit, you don’t hear that anymore. We’ve gotten used to the idea that photography can be manipulated.

With the rise of the selfie, the avatar, the portrait miniature has made us aware both of the mechanics, how we can cheat and use lighting, different angles to distort and improve. Also we are aware of the little messages that you can convey in a simple image of a face” Yeo’s interest is in finding the true self, not the ‘selfie.’ Now more than ever ‘the face’ is loaded with significance.
Through constant sharing on social media, portrait is both more widely and´more deeply analysed by the mainstream, even if it is subconsciously.

Yeo uses a combination of digital photos and painting from life when he works. “I’ve tried doing it just from live and just from photographs. There are limitations to both. You can do a lot with photography, but unless you spend a bit of time with someone you won’t get them precisely for the purpose of the painting, you’re losing an element unless you use digital too. So what I tend to do is start off by taking a load of photos, 100s maybe 1000s, over a couple sittings. Then, when I have an idea of how it’s going to look and what story it’s going to tell, then you get them back in and sit 2, 3, 4, 5 times but actually sometimes its not only about sitting, it’s about taking them out for lunch afterwards and doing whatever you need to, drink wine or go somewhere unusual to get them not thinking about how they look, because that’s what you want, you want to tell the story of how someone actually is.”

In many senses this is the same for an interview. The person asking the questions wants to show the side of the subject they are more often than not trying to hide with their answers, given to reflect the image they want people to see. Perhaps it’s Yeo’s experience of both this, and painting self-portraits that makes him an exception to this. “You get up in the morning and look in the mirror and pull a face to try and look better than you do. With photos you get to edit them down until you look like a movie star. I think we romanticise about the way we look. Now, when I try and do a self-portrait, I get a load of photos, and I’ll take some, other people will take some and people I know choose the ones that look like me, so I sort of abdicate the choosing aspect.” His awareness of the self as a concept, as well as the fact he survived a fatal illness, has probably led to him knowing and feeling comfortable with himself.

He is very relaxed and friendly, and much the same during the interview as he is when speaking to friends, and at lunch afterwards. He reflects in a very matter of fact way that the timing of his illness, when he was a young man, was probably a good thing, “It’s actually, in retrospect, a very good time for that to happen because at that stage, especially, you’re trying to think about what to do with your life.”