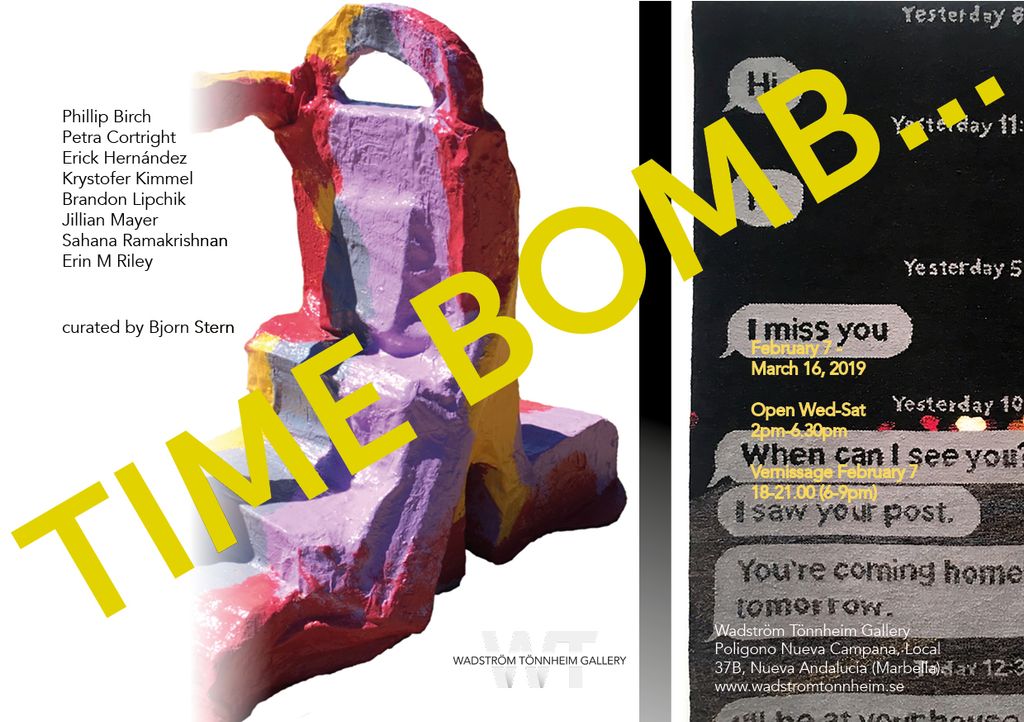 Avslutad
Utställning
TIME BOMB...
Medverkande konstnärer
The exhibition “Time Bomb…” at Wadstrom Tonnheim Gallery, Marbella brings together a group of emerging artists from the U.S.A. They are presented for the first time in Marbella and some are presented for the first time ever in Spain. “With our recent focus on cultural phenomena brought forward as inheritance from the early days of pop-art, which has amalgamated into vast and colonising structures of the mainstream, certain aspects of self referential art that used to reside in the subcultures of post-modernity and through the circular discussions of the ironically detached, have now taken on a malignant and destructive force in the wake of global social media and the realignment of the many psychologies of the self. To describe such a complete change of attitude towards visual culture as the one experienced in the present, as a ‘phenomena’, is perhaps broad. But the seismic transformation in our perception of contemporary visual information has changed beyond recognition while in the past we were perhaps better equipped to compartmentalise such information as art, advertising, design or propaganda. These perceptions have now been utterly shattered. The force of change can best be detected among emerging visual artists across a globalised culture of consensus panic, participation economies, malignant narcissism, myopic absorption of knowledge, group pressures and the warping of human time into that of exo-time. The exhibition “Time Bomb…” aims to address some of the challenges for contemporary artists today to create resonant narratives in an age of extreme superficiality and aggravated self reference. It also takes a look at the emergence of exo-time in visual culture, where production of images can in no way be consumed in any meaningful way by means of its own delivery systems. Exo-time emerges then, the exhibition argues, as a disconnect between the maker and that which is made. If there is little or no equipment for a participant in visual culture to even absorb what is produced, such as the vast quantities of content from social media or A.I. generated material, might then the content itself become a victim of its own evacuation of meaning? How many images of bowls of pasta on Instagram does it take before we no longer need to view them? Statistics reveal that 1,3 Trillion images were uploaded online in 2018 alone. Or can we imagine a new production of culture where humans are only one part of a greater whole and where other “participants’ such as Big Data, A.I. mapping, group generated content also warrant valid authorship? If so, what languages and what imagery might this new form of looking produce? Are we facing now the impetuous emojification of visual culture? “Time Bomb…” aims to display the current zeitgeist in art making and why the act of painting, drawing and sculpture has now almost become an act of defiance in an attempt to slow down time. Soundbites such as ‘fake news’ and ‘new sincerity’ co-mingle in this new landscape of artistic production where artists are increasingly seeking ‘authenticity’ but where such processes are being drained of resources in the service of the ever faster demands of cultural consumption. The exhibition is curated by Bjorn Stern, a London based art historian, critical theorist and independent art advisor. His previous exhibitions include, “La Bella Figura”, which addressed the challenges of creative production during the First Italian Republic in painting, installation and filmmaking, which focused on the post-war cohabitation of political and societal chaos and creative genius. Earlier curated shows by Bjorn Stern have addressed the history of Street Art, its’ anti-intellectual origins and its gradual transcendence into the general art world, as well as the acclaimed “In-Significant’s” exhibition that took place in Malmö, Sweden in 1998, which accurately predicted the emergence of what was to be coined ‘post-internet art’ a decade later.