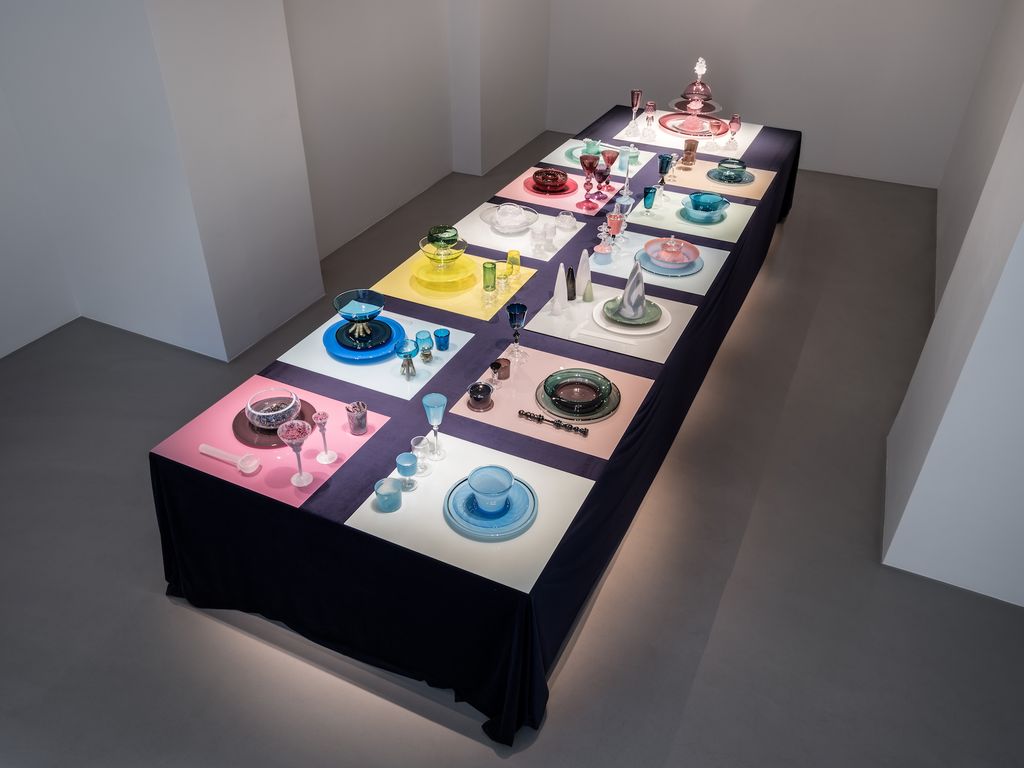 The After Party is a collaboration that lasted one year. It began with a work week in Denmark in July 2016, and throughout the entire process, the focus has been on shared expression. When Evelina Dovsten and Kristin Larsson first met, they were 18 and 15 years old. Larsson’s playfulness and Dovsten’s structured work approach allow them to complement and challenge one another. Neither is afraid of hard work and together, they possess a rich toolbox of experiences and technical expertise. They both take an approach to glassblowing that is based on the studio glass movement, which accounts for the small-scale and artistic elements. The work is done by the artist herself, unlike in the glass industry, where the artist works in a hierarchical system. BIOGRAPHY Evelina Dovsten was born in 1987 in Eskilstuna. She began blowing glass at the age of 15 and studied at Sankt Eskils Gymnasium, as well as in Seattle and New York. During a 10-year period, she worked at glass studios in Sweden, Japan, Denmark, Austria and Scotland. She entered the bachelor’s program at the University College of Arts, Crafts & Design in autumn 2013 and graduated a year ago; she is now in the master’s program. In her work, Evelina Dovsten touches upon her craftsmanship as a conceptual subject. It involves the body and the place of craftsmanship in it: the body knows more than what can be described theoretically. In spring 2016, Evelina Dovsten graduated with a bachelor’s degree from the University College of Arts, Crafts & Design with “Verktyglighet,” which is also an introduction to her master’s work. In the installation, Dovsten’s physical labor is presented in the form of three weeks of work in free-blown glass: over 330 containers blown in 120 hours. The work can be tracked graphically through lines and symbols. “When I look at the glasses in retrospect, they’re like an extension of my body, like a tool. I’m looking at my handiwork and my body from the outside, through the glass. ” Evelina works with installations, objects and utilitarian objects. Utilitarian objects are often the protagonists of Evelina’s installations. Because we all encounter these items every day, this takes her conceptual work into the homes and daily lives of others. “In a time when we’re transitioning from an industrial society to a knowledge society, in my artistry I’m searching for my place as a glassblower of the modern age.”   Evelina Dovsten has received grants from the Fredrik Lindström’s Memorial Foundation; Estrid Ericson Foundation; Eva Oscar Árens Hantverksstiftelse (foundation); the University College of Arts, Crafts & Design; the University College of Arts, Crafts & Design Student Union; Stiftelsen Den Nordiska Första Johannislogens Jubelfond (foundation); the J.L. Eklund Foundation for Craft Scholarship; and Boda/The Glass Factory, residency. Kristin Larsson was born in 1990 in Gnesta Municipality and grew up on a farm with her parents, who were farmers. When the building that had housed her closed primary school was bought by glass artist Ebba von Wachenfeldt, Kristin began working as a glass blower at just 14 years old – an internship in eighth grade continued with a summer job through graduation. After graduating as a glass blower in Kosta, Kristin Larsson practiced in Austria and the US. In addition to a bachelor’s degree in ceramics and glass from the University College of Arts, Crafts & Design, she has studied at the Pilchuck Glass School in Seattle, Washington, US.  “My roots as an artist and a glassblower are in the Scandinavian studio glass culture. I am interested in norms, social codes, hierarchies and status in both the world of glassblowing and in society. I want to explore and question the background of how we behave and what we create. My work is often ironic and playful, with feminist undertones,” says Kristin, who feels she is strongly influenced by the fact that she has always worked for women in an otherwise fairly male-dominated industry, with a norm of machismo that says the bigger, the better.   Utility glass is often the center of Kristin Larsson’s work, because it is charged with perceptions and easy for the recipient to identify with. The creative process, with its repetitive steps and trust in the hand’s expertise, is important to her. Kristin usually blows free-hand, with no mold, because she enjoys the quality and feel of flowing glass. She also enjoys using her own experiences as a starting point and placing herself in the center of her work. She has occasionally created an alter ego and used performative elements to convey her message.   Kristin Larsson’s degree project involved combining glass with metals such as brass, copper and tin. The purpose is to create a new expression and transform the metals into living materials, thus highlighting the qualities that resemble glass. “My work has been playful, even naive, but I have now partially pivoted away from my earlier style. I found it interesting to combine tin with glass in order to let go of my craftsmanship tradition and my technical expertise regarding what is ‘right and wrong.’ Adding new materials became a way for me to find new modes of expression.”