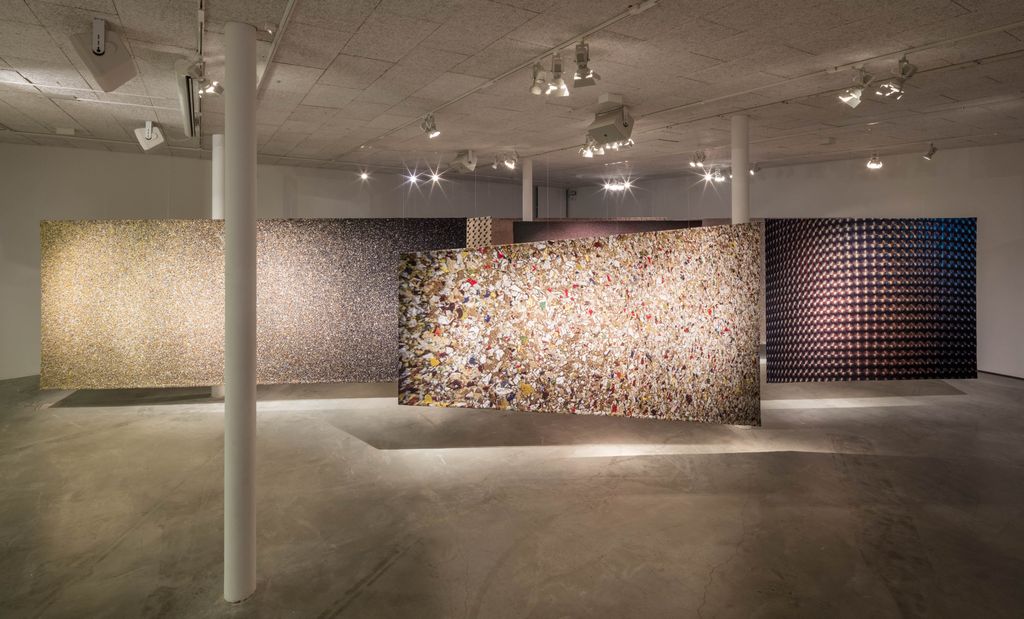 Avslutad
Utställning
NEW ENTER IMAGE
Miriam Bäckström
Miriam Bäckström’s exhibition New Enter Image, is a new body of work that negotiates the boundaries of photography, textile and architecture. The focus of the exhibition is a large-scale installation of suspended woven tapestries based upon photographs Miriam Bäckström has taken. Created in different sizes and formats, these tapestries redefine the architecture in the gallery. The original photographs are extremely high-resolution digital images of various banal manufactured surfaces including textile, plastic and cardboard. They capture the intricate details that only advanced technology is able to register. This information is then translated into digitally woven tapestries, a medium often associated as traditional and tangible: where the resolution of the photographic image ends, the yarns of the textile begin. In Miriam Bäckström’s previous work, photographs of rooms and interiors reveal themselves to be staged or referred to reality to somehow be artificial. In Set Constructions (1996–2002) the works offer two perspectives of a film set within one image. One perspective documents the world that Bäckström is in when documenting the film set, whilst the other presents the illusion, the film set, which is a reality in it self. In these works fiction and reality are equally relevant and credible, yet visually distinguishable from each other. New Enter Image, builds on this work, where fiction and reality merge into one image, one perception. Photography has, since its invention in the 1840s, placed the viewer in front of an image, to occupy the spot where the camera was positioned when the image was taken. Today, the mass and constant flow of images means there are multiple perspectives at play at anyone time. We can say that one no longer looks at an image from a singular perspective; but rather inhabits a situation from multiple viewpoints, or as Miriam Bäckström describes it, we are able to enter the image. Artificial reality is characterised by the absence of rules and restrictions that determine its physical counterpart. Today, it could be said that photography is being forced to abandon the tasks it traditionally was born to perform – as a tool to represent and document reality. Photography no longer signals ‘truthful representation of the real’. Instead it refers to itself, imitates itself and often references its own history. In New Enter Image Miriam Bäckström pushes photographic perception to a point where distinctions between medium and image, material and surface become so paradoxical that they can no longer be upheld. She seeks to push the medium to a point of collapse. As a photographic method she employs imitation and illusion, recognition and distortion. Whilst the works in New Enter Image appear to be two-dimensional objective representations of matter; they can in fact be said to render every depicted surface unidentifiable and offer the viewer hypothetical, theoretical and highly speculative scenes. The exhibition New Enter Image also presents the film Som man brukar säga (As The Saying Goes), a staged play, that has been filmed in front of an audience. The work can be read as a competition in acting or as the art of making conversation. Every character in the play is distinguished by a particular character description. Six actors are given a character, without knowing which one they will play in advance. There is no opportunity for a read through of the script or a rehearsal. According to the rules of the game all interpretations of their characters are permitted: the actors are able to choose during the course of the game, what lines and directions they want to use to portray the character they believe themselves to be. Reoccurring exclamations of speech and actions are the foundation upon which the characters are built. As the play develops these actions begin to expose their character’s possibilities and limitations. The audience is able to follow the desire of the characters, desires we often attempt to hide or conceal. In the re-occurring pattern of performance, it is possible for the audience to follow, not only the character that is in construction, but also chart the characters fate.