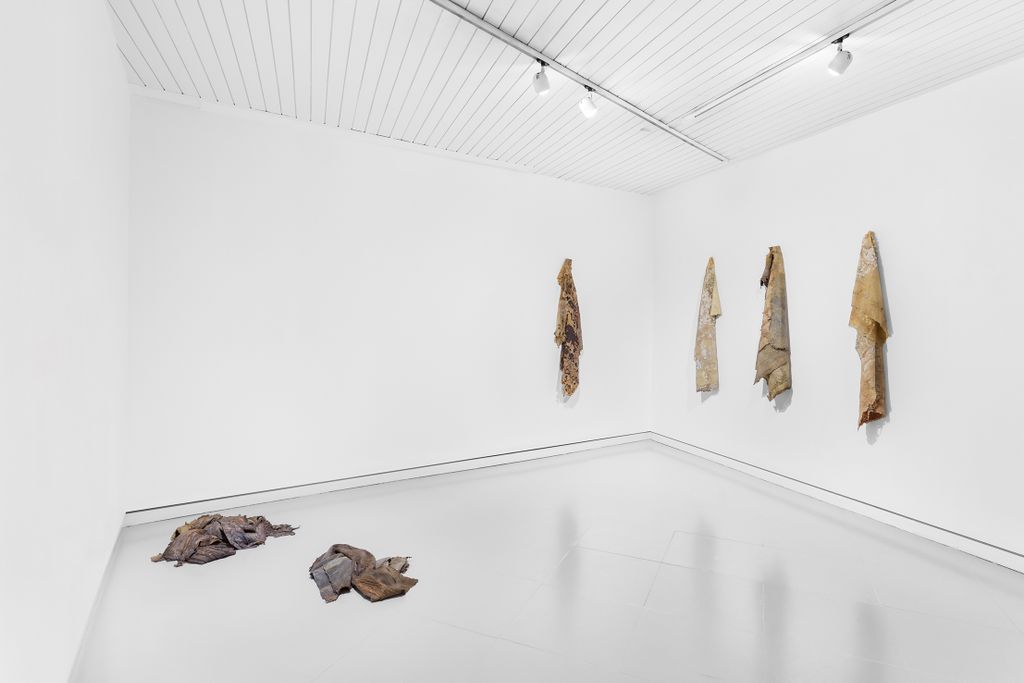 Avslutad
Utställning
EXÚVIA
Filipe Cortez
The understanding of skin in its relationship with the body - conditioned by an anthropocentric representation - has established elasticity as a primary characteristic of a development paired with that of the rest of the organism and adjustable to the shape of that body. There is therefore a formulation of the notion of skin as a definer of identity, as an element dependent on its continued relationship with the body. In some animals, however, the relationship with the "skin" is momentary, serving the shape to which it corresponds for a certain period of time, and being abandoned when it no longer corresponds to that body structure, giving way to a "new" skin. Exúvia (exuviae), the title of the exhibition Filipe Cortez presents at Acervo, is the name of the carapace (or skin) dropped by insects, crustaceans, arachnids and reptiles as a consequence of this growth. On it is engraved not only the configuration of the body but also the adversities which it faced. It therefore constitutes an autonomous identitarian element as while referring to the morphological characteristics of the species to which it belongs, it also records the marks and scars, deformations and malformations of each individual being, thus assuming itself as a singular portrait. Memory remains preserved in these hollowed-out shells which, even when removed from their context, carry a crystallised reality. The work which Filipe Cortez presents bases its process precisely in this concept: the fixation of a memory its manifests in relation to a space or an object. His practice results from a recognition of the plastic, pictorial or formal dimensions of the memories present in spatial elements - often architectural elements - recovered by the desquamation of these elements through various techniques. Filipe Cortez does not focus however on the action of uprooting or on its meaning, but rather on the effect of the representation of an intrinsic characterisation. This proposal of an imagetic construction dominated by the overlapping of actions or interactions on a given object necessarily imposes a condition of temporality. In this sense, ruin, as a theme as well as a representation, assumes significant symbolism in the aesthetic and conceptual structuring of Filipe Cortez's work, synthesising a condition of identitarian construction translated by the figuration of reminiscence. The paintings on canvas, corresponding both in technique and in form to the traditional parameters of the discipline, explore the logics of the shell and the characterisation of a space while using ruin as a way to reach a field of technical uncertainty, suggesting these paintings to be a section of a real wall, perhaps of an abandoned warehouse. Time as configurator of the shell and the ruin implies, however, a condition of appropriation as a constitutive principle of the representation of an ephemeral identity. Thus, works such as the installation of plaster blocks or that of the hanging skins („Skin") reflect an appropriation of realities which, referring in the first case to a fossilisation process and in the second to an organic or textile representation, retain memories of experiences and practices that have taken place in a given period of time. A small work in the form of a trapezoidal prism, which seems to discreetly want to come off of the wall, summarises the principle of the relationship between objectual memory and temporality by drawing a direct analogy to the notion of exuviae: the carcass of the accumulation of months of oils and latex which lined the bottom of a tin, the identity of which is the memory of an artistic action, is removed and abandoned to make way for a new process. Miguel Mesquita .............. Filipe Cortez (Porto, 1986) holds an MA in Painting from the Faculty of Fine Arts of the University of Porto and a BA in Painting from the same institution. He exhibits regularly since 2007, highlights being his exhibitions in New York City and Taipei. In 2015, he completed a six-month artist residency at Residency Unlimited (New York) from where many collaborations with galleries and curators sprouted. Cortez works within the fields of painting, sculpture, and site-specific installation examining memory and space of architectural spaces. The multidisciplinarity of media has become more and more evident in his work, for which he has received various awards and honorary mentions. He lives and works in Porto.