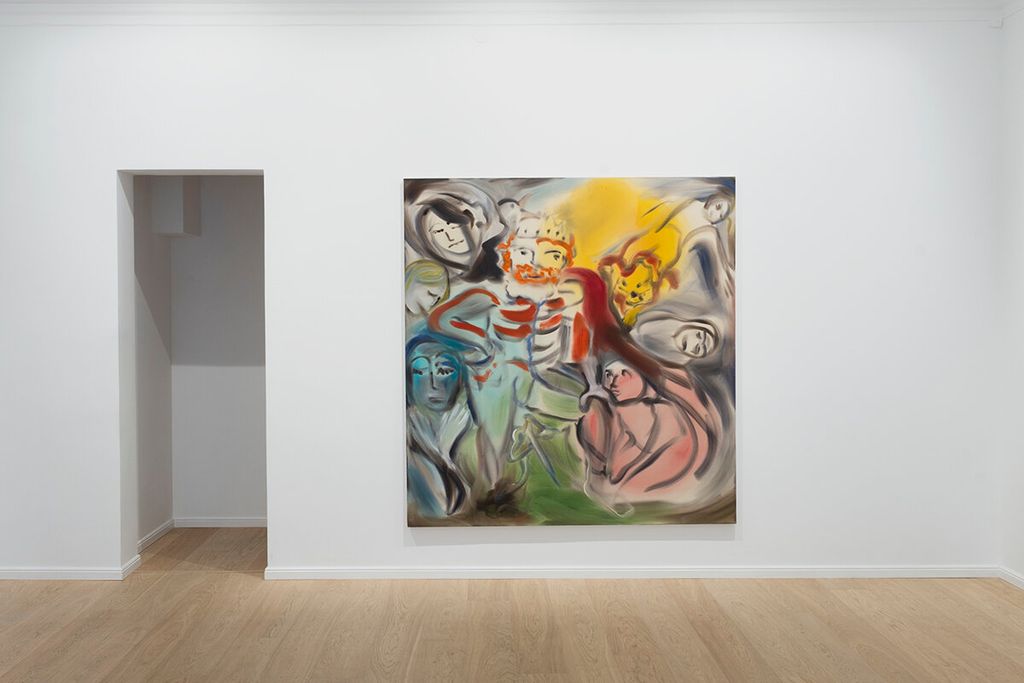 Avslutad
Utställning
ANGRY BIRD
Sophie von Hellermann
Larsen Warner is very pleased to present Angry Bird by the British based artist Sophie von Hellermann (b.1975). The exhibition features new work made during 2020 throughout the Covid-19 pandemic and marks von Hellermann’s first solo exhibition in Sweden. For over two decades, painter Sophie von Hellermann has conjured often large-scale, imaginative scenes with exuberant immediacy, depicting literature, history and scenes of pure invention. During the UK’s first lockdown in early 2020, von Hellermann read The Mirror and the Light by Hilary Mantel. The novel is the third installment of her Wolf Hall trilogy and charts the rise and fall of Thomas Cromwell during 16th Century Tudor Britain. The novel begins with the execution of Henry VIII’s second wife Ann Boleyn and ends with the demise and subsequent execution of Thomas Cromwell, the Kings trusted advisor. This story by Mantel, as well as the writings of Swedish writer and playwright August Strindberg acted as the jumping off point for von Hellermann to create various ‘Gedankenbilder’ (pictures of thoughts) reflecting ideas on politics, culture and modern day cancel culture. Von Hellermann skillfully merges these literary and historical inspirations and holds these up as a mirror and a model for contemporary issues of politics and society. When standing in front of von Hellermann’s paintings, we can see the human figure, object and landscape are formed by the same painterly gestures as their abstract surroundings, with her various spirals and curves weaving their way across the canvas to create her unique lyrical worlds. In the studio, the artist applies pure pigment and acrylic emulsion directly onto unprimed canvas, with her use of broad-brushed washes imbuing a sense of weightlessness to each painting. With the pigments and acrylic watered down, the gestural marks create paintings that are light and airy with the artist noting that she wants the results to look as fleeting as the images that come into her head. In von Hellermann’s romantic, pastel-washed paintings, the artist plays with the idea that we are merely a projection of the past and our current reality does not really exist. Instead, we are an imaginary future scenario being played out, with the quick, thin-matte washes acting as representations of this idea. This means that von Hellermann can never truly plan a painting, instead, the artist starts with the simple wish to create a clear image of something that strikes her. Each painting in Angry Bird is wrapped in a mesmerising combination of colour, with pastel hues dancing and morphing with ephemeral fluorescent flashes. Each colour by themselves though does not mean much with each one only acting as screens for projection. But once set against and mixed with other colours, they start acting out their abilities and potentials in relation to the space they create. Von Hellermann's paintings draw upon everyday affairs as often and as fluidly as they borrow from the imagery of classical mythology and literature to create expansive imaginary places. She animates these complex narratives with a swirling, energetic hand and a dreamlike, vivid palette that moves the audience into seeing how dream images can come together from the things we have seen, read, and experienced. Von Hellermann (b.1975, Germany, lives and works in UK) received her BFA from Kunstakademie, Düsseldorf and an MFA from Royal College of Art, London. Selected solo exhibitions include: A Midsummers Night Dream, Pilar Corrias, London (2020); Sophie von Hellermann: New Waves, Pilar Corrias, London (2018); Sophie von Hellermann, Office Baroque, Brussels (2017); After a Fashion- A Play with Fire, Vilma Gold, London (2015); Novel Ways, Greene Naftali, New York (2013); Elephant in the Room, Firstsite, Colchester (2013); Crying for The Sunset, Vilma Gold, London (2011); Sophie von Hellermann & Josh Smith, Museum Dhondt-Dhaenens, Deurle, Belgium, Le Consortium, Dijon, France (2010); Judgement Day, Chisenhale Gallery, London; and Neuer Aachener Kunstverein, Aachen (2006). Selected group exhibitions include: Jahresgaben 2016, Bonner Kunstverein, Bonn (2016); Call and Response, Gavin Brown's Enterprise, New York (2015); Jerwood Encounters: The Grantchester Pottery paints the stage, Jerwood Visual Arts, London (2015); Empathy and Abstraction: Modernist Women in Germany, Kunsthalle Bielefeld (2015); I Cheer a Dead Man's Sweetheart, De La Warr Pavillion, Bexhill on Sea (2014); Out of the House, Cranford Collection, Fundacion Banco Santander, Madrid (2013); Folk Devil, David Zwirner, New York (2013); In the disappearing mist, the gift of whispers, Focal Point Gallery, Southend (2012); Watercolour, Tate Britain, London (2011); Sophie von Hellermann and Josh Smith, le Consortium, Dijon (2009); 100 Years, 100 Artists, 100 Works of Art, Art on the Underground, London (2008).