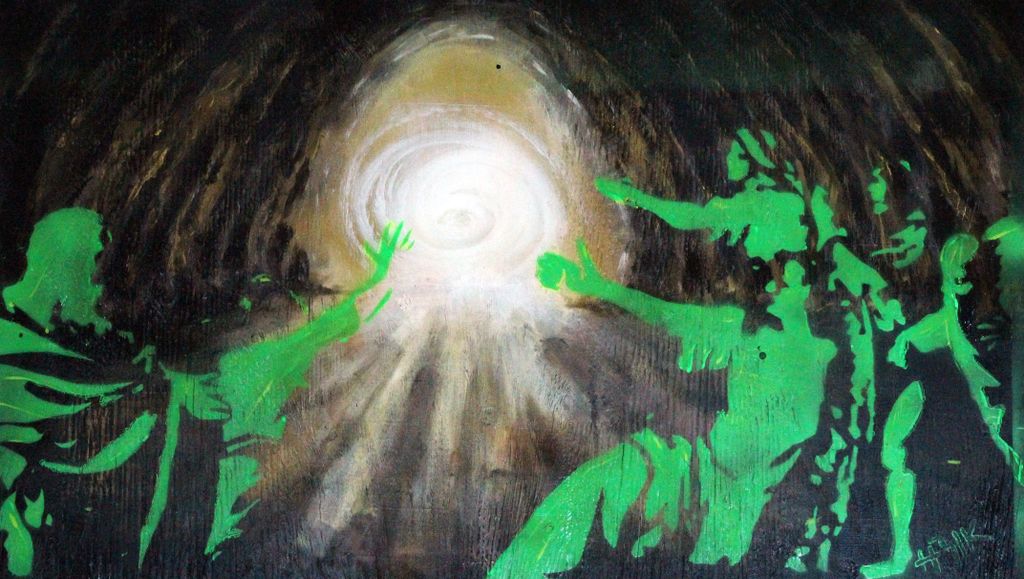 Hrik
The Allegory of The Vortex, 2020

“The people crave.Beliefs, religions, thoughts, ideas and philosophies.Make sense of it!But it’s the incomprehensible Vortex that is behind the curtain. It is everything.It is you and everything else.”.Intuitive painting makes the exploration hard in itself. But I love it.I started out with only 2 vague ideas. I wanted it to be generally dark and moody, and I wanted to do a lime green stencil on top. That was all.I did the basics of the background with closed eyes, and soon saw that it must be a cave. Wanting the mouth of the cave to have a hyper bright light shining in, something interesting happened when I began painting the light. The light became a Vortex! But the REALLY interesting thing was that a knot in the wood revealed a very clear Eye in the epicenter of the Vortex!So I just stopped what I was doing and decided that the vortex and the eye must stay, as is!.I wanted to have people reaching out, desperately, in awe, towards the center, towards the Eye of the Vortex! Classically dressed, like Greeks, Romans, people from biblical times. To me they are symbolic of how desperate people are to try to make sense of something they are not able to make sense of. Reality. The Vortex is what is controlling this simulation we live in that we call “reality”, or “the world”. Call it God, call it the Master A.I, call it anything you want - this is the entity controlling everything.The people around it are us humans, reaching for knowledge, without succeeding, They don’t succeed, since they are themselves simulated. Hence they are flat, one color, and semi see-through. The Vortex decides what they should and shouldn't succeed with. So this is not for us humans. At least not yet. But, it is in our simulated nature to try, and then try again.The question of reality is similar to Plato’s allegory of the cave. Absolutely. Interesting that I also did it like a cave with a light and people trying to understand the world hehe. But. This is not Plato. This is Hrik’s Allegory of The Vortex..Talk amongst yourselves!