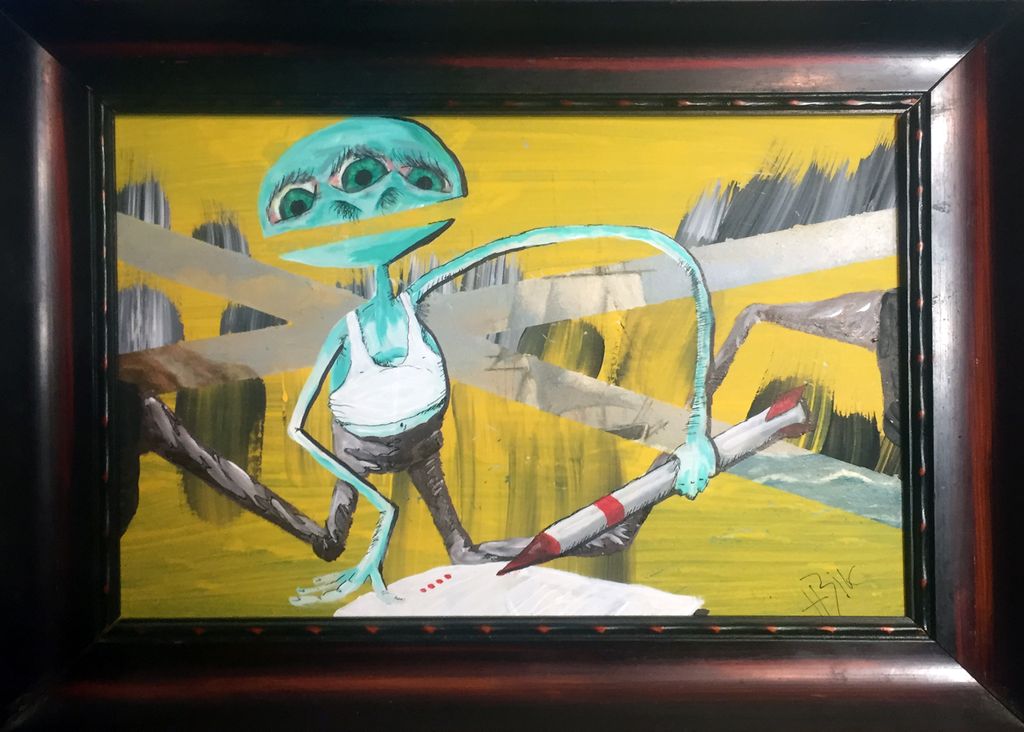 For “Sign The Dotted Line” I had (as many other times) found an old painting in the nearby junkyard that I painted over. The original motif was a very classic painting of a big sailing ship out at sea, on a masonite board. And I kind of liked it - but not enough to not paint over it hehe. Don’t worry, I always do some research on the originals I find before I make them mine, just so I don’t accidentally destroy a Picasso or Van Gogh lol. Anyways, I decided to keep parts of the original for once, and masked off the big cross with tape, before adding my new yellow/black/white background. At this stage I had no idea where I was going with this - my working name for this was actually “Boatie” for a while haha.. Anyways, then I decided to actually plan out the painting a bit in advance, before adding more paint to it. An unusual move for me, but hey, this is what my intuition told me to do, so… SO I sketched out this surreal, 3-eyed, alien-like creature with limbs that are just ..wrong? Then I felt I wanted to make it a bit political, and gave him a big missile as a pen, which he’s using to sign a contract of some type. Now, I’m not sure if he’s signing a contract with the Devil, or if it’s a political contract, or if he’s signing away parts of his integrity - but it’s something that’s not good. And it’s something that even affects non-human beings. Must be serious. And I feel, what “Sin the dotted line” is about, is giving up on something, signing something away. Maybe, in these Corona times, it’s about giving up on our old way of living, and agreeing that we must find new ways of living, to cope with the new situation? I leave that up to you to decide for yourself - but those are my thoughts! Hope you enjoy it! :)(Measurements excluding frame)