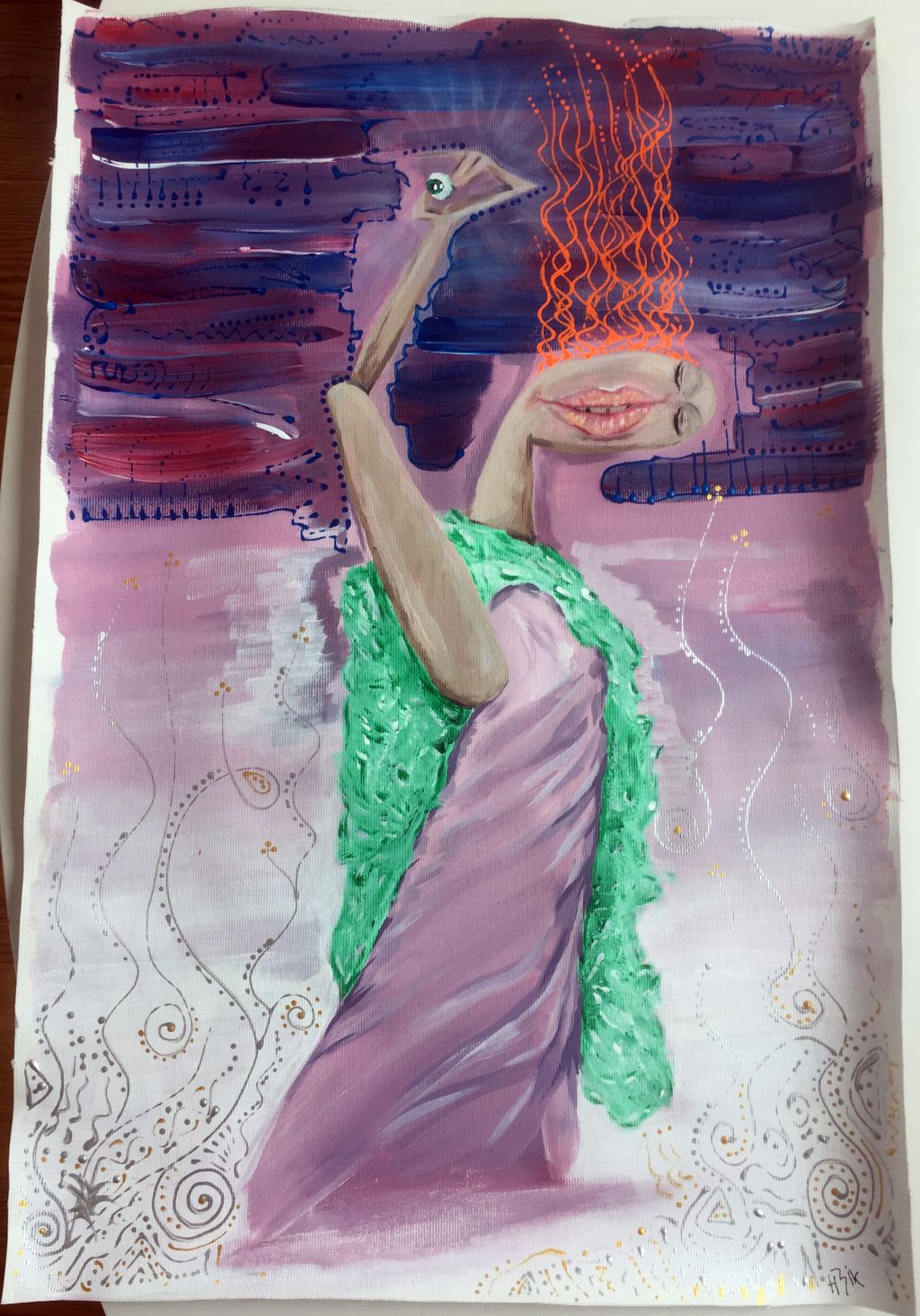 Tonight on stage - The grand diva Lady Liberty performing a multi-dimensional clairvoyance show! Close your eyes and come on down! You’ve been warned!-This time I actually didn’t start blind painting the background with acrylics - I did some big bold strokes with a simple pencil instead, with my eyes closed. Just to get some basic shapes. I looked and I looked at my simple strokes, and finally saw the basic shapes of a woman! An elegant woman in a cocktail dress, and with a boa! Just, her head was ..a little “weird”?But - I just embarrassed it, and decided I just wanted to make her as weirdly, and as surreally beautiful as I could! An early influence was actually Madonna, in her music video for “Material Girl”, and I had ideas to make her stand in the limelight of a 50’s show stage.But the more I worked with her, and the more her personality came through, I realised it’s not Madonna at all. It’s a new, glamorous, updated version of Lady Liberty, as in the statue of Liberty!Now, I painted this beginning of the huge and inspiring BLM protests across the US, and I felt that the world needs a new Liberty goddess more than ever! I had decided early on to put the (all-seeing) eye in her raised hand instead of the torch, but now it felt even more right! This is a Liberty, who shines really sees any injustice, and who treats everybody the same - just and fair! And by doing so, liberates them.The liberation takes place in both our own physical universe as we know it (or think we know it, or have learned to know it) - as well as any other planes of existence, that we do not yet know about. I’m using the word “know” loosely here. But this is why the title “La liberté éclaire le multivers” came about.And that obviously is a riff on the actual title of the Statue of Liberty, “La Liberté éclairant le monde”, which translates to “Liberty Enlightening the World”.The orange, gravity defying, “burning hair”, I had also had as an early idea, and it is actually more relating to me embracing the initial surreal look of the head - so it’s purely for aesthetic reasons rather than symbolic. I also decided that I’d leave the background in this kind of unfinished stage, and then rather embrace that as well - and then just go to town with the squiggly, swirly lines and dots all around her. I really like to have all of these little hidden details in the picture, and La liberté éclaire le multivers has plenty! And also a few not-so-hidden ones, as in just text incorporated into the milieu.La liberté éclaire le multivers is framed, and that is how it's sold and shipped. However, the frame is not part of the artwork itself, so you’re more than welcome to reframe it, if you should so please.If you are interested in acquiring this piece of art, I’m happy to supply additional pics (including of the early stages progress), and answer any questions.