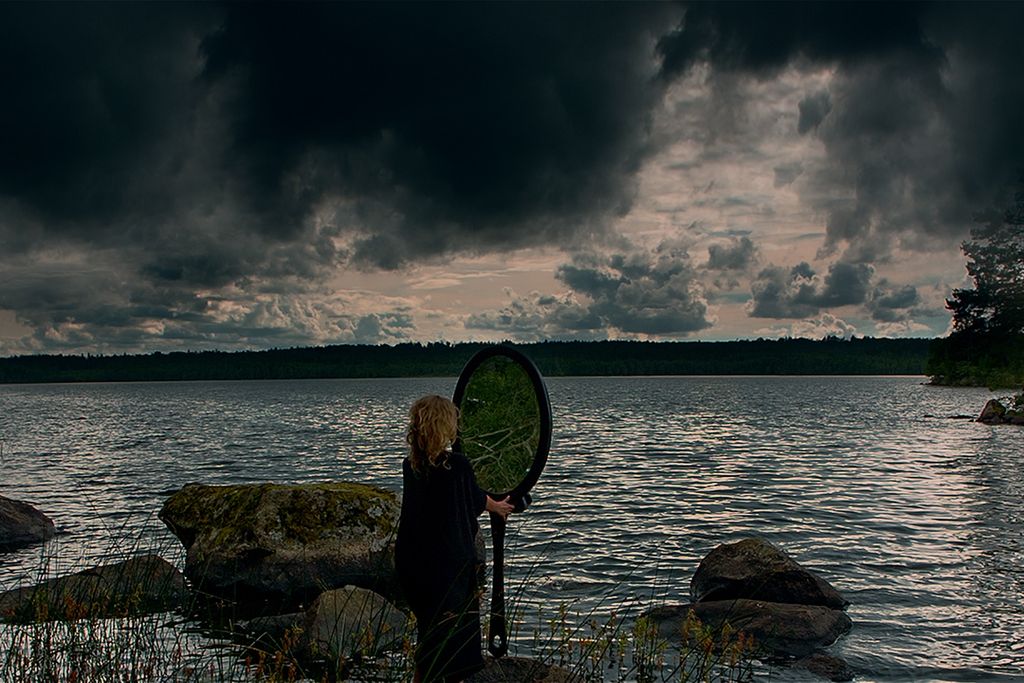 The short Art film HÉRON – fragrance of violence is a quarts loop, with just a scent of violence in an otherwise dreamy and soft visual flow. In the film we keep looking back to a doll house, a lake – and a woman who either fiddle with different objects, are being transformed into children or is found lifeless in a burned down forest, or half buried in sand. The woman cover the doll house using a blue cloth, a veil of oblivion covering the landscape of childhood. We also see humans wearing animal masks in the deep forest, people with bird heads, large mirrors in small rooms; the film shifts in scale and perspective, reminiscent of classical surrealism. The scenes form an evocative string of pearls, having no order, as in dreams (and in nightmares). HÉRON – fragrance of violence is an art film. In my art I work with illusions of large and small, inside and outside, and in the film I use myself as a sort of Alice in Wonderland, and I play with time. My vision is to make film that plays with the idea that everything that happens happens at the same time. Is time a fundamental part of the universe, does it exist independently from us humans or is it an intellectual construction – not existing by itself, but created by humankind?The short art film HÉRON consists of three storylines / events that are displayed in parallel throughout the film. The first part of the film was filmed in the forests of Småland in Sweden. The doll house, playing a central role in many scenes, is built to be a copy of a stout house in Småland in the years of 1700-1800. During this period there was famine and poverty in Sweden, especially in the regions of Småland. This led to a massive emigration to America. Letters from the emigrants told stories depicting a land of possibilities, religious diversity and political freedom. I relate to this because my family emigrated from Finland to Sweden, and I use this experience and transform it into art.Unfortunatly the original house in Småland, including all the furniture, declined and had to be torn down to build new housing. But the doll house and the miniatyre furniture still exists, and have been documented in Héron – fragrance of violence. The other two parts were shot partly in Ramnäs, a large burnt down forest outside of Sala in Sweden, and in a green screen studio that we set up at Cité International des Arts in Paris. The material is combined in an experimental way / process; the different parts of the film coexist simultaneously and together they carry new meaning – through the variation of images and sound design when juxtaposed. The purpose was to create an "automatic" art, developing the material directly from the subconscious, without being filtered through reason, morality or aesthetics. We played with the so- called "automism" - a kind of random stream of inner images. In Paris we added elements not originally in the script, strong colors and new props; large bird heads and a blonde doll-woman. Me and David Nord shot and developed the new story threads in the green screen studio (we spent 2 month there). The “Doll shots” were inserted into the doll house that we filmed in Småland.I play all the grown-up characters in the film, and the children we shot in the forest are played by Siri Sutinen, Illyan Sutinen and Elvin Kander. Daniel Bingert composed the music for the film, David Nord did the sound design in collaboration with me. Editing, compositing and postproduction was done by David Nord. The main inspiration for the film derives from my childhood summer place in Majkkala järvi in Finland.The film was financed by Konstnärsnämnden in Sweden (the Swedish Art Council) and by the Royal Academy of Fine Art of Sweden.Director and production designer – Natalie SutinenCinematographer, editor, vfx, post production and sound designer – David NordMusic composer – Daniel BingertCast –