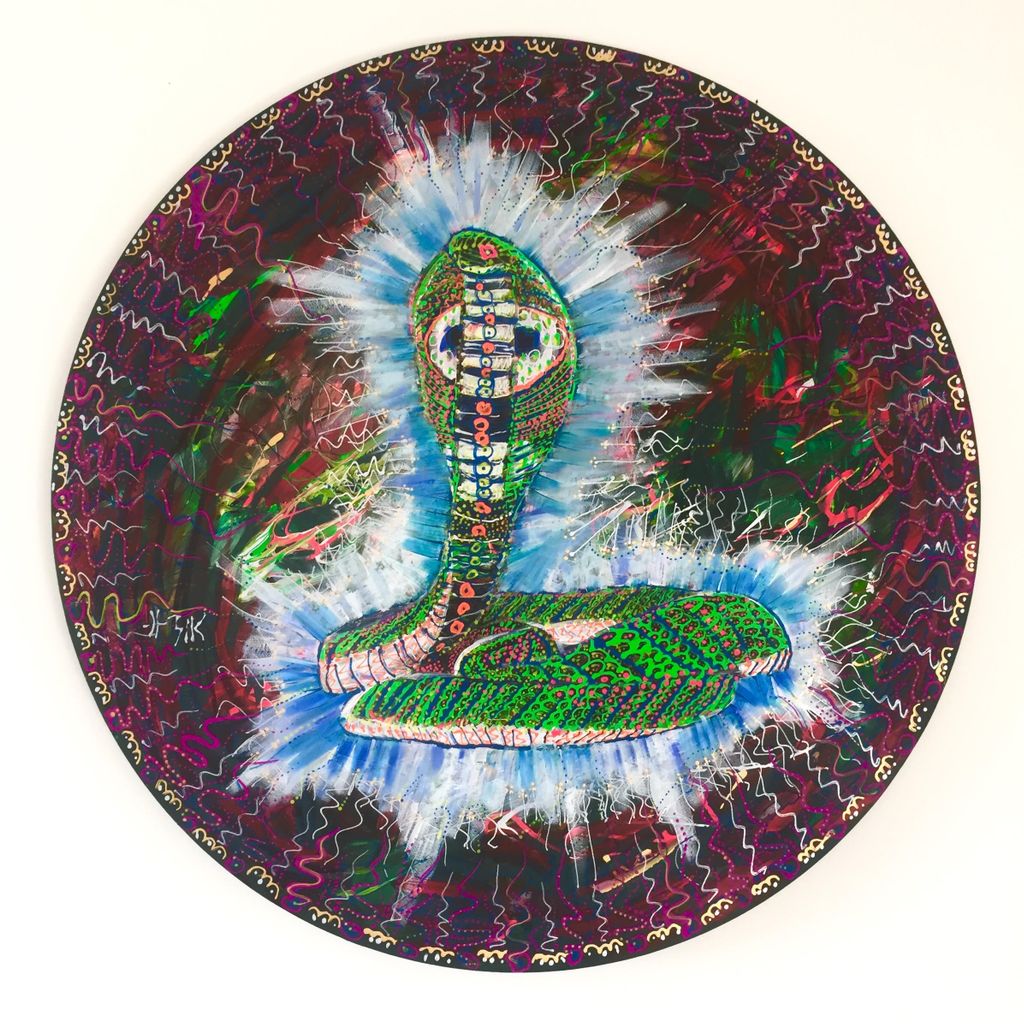 Originally an acrylic splash-art on top of a cheap, round print from Ikea (not framed), the neon cobra soon materialized in its power pose, demanding both respect and admiration. Its name is Spectacle, and it is here to help you see love and beauty where you thought there were none.-Ah, 50’s Jesus. What a strange name, eh? We’ll get to that soon.This is originally a cheap print bought at Ikea in Dubai, which just had some pattern on it. But when I saw it in the store, I liked the round shape, and the big size.At this point, probably in 2014, I actually had an idea to re-paint it into a huge eye ball (which is interesting, considering where the painting ended up). Then in 2018, after having been stowed away for a few years, I decided to just splash acrylic paint on it together with my daughter, kind of just “feeling the paint, and allowing ourselves to make big bold strokes”.Then it hung like that for a while in my daughter’s bedroom. And then it got deported down to the basement, for about a year. And then in 2020 I brought it back upstairs (“to life”), and had an idea to paint a big cobra on it, in its defensive strike pose! It became pretty intense, and then when I added the decoration around it, it became VERY intense!Now, in Swedish, a cobra is also called a "glasögonorm", a “spectacle snake”, due to the pattern it shows on its flattened neck. To me this is interesting, partly because of my early idea to paint a big eye on this canvas, and also because of my current fascination with eyes, which has become somewhat of a theme in The Akashic Records. The name 50’s Jesus came to me after adding the blue-white striped glow around the cobra, since it reminded me a lot about Jesus iconography of the 50’s - and then I thought - hey, why couldn’t Jesus be a snake today? Why not indeed.The painting is not framed, and that’s how it is being sold and shipped.If you are interested in acquiring this piece, I’m happy to supply additional pics, and answer any questions.