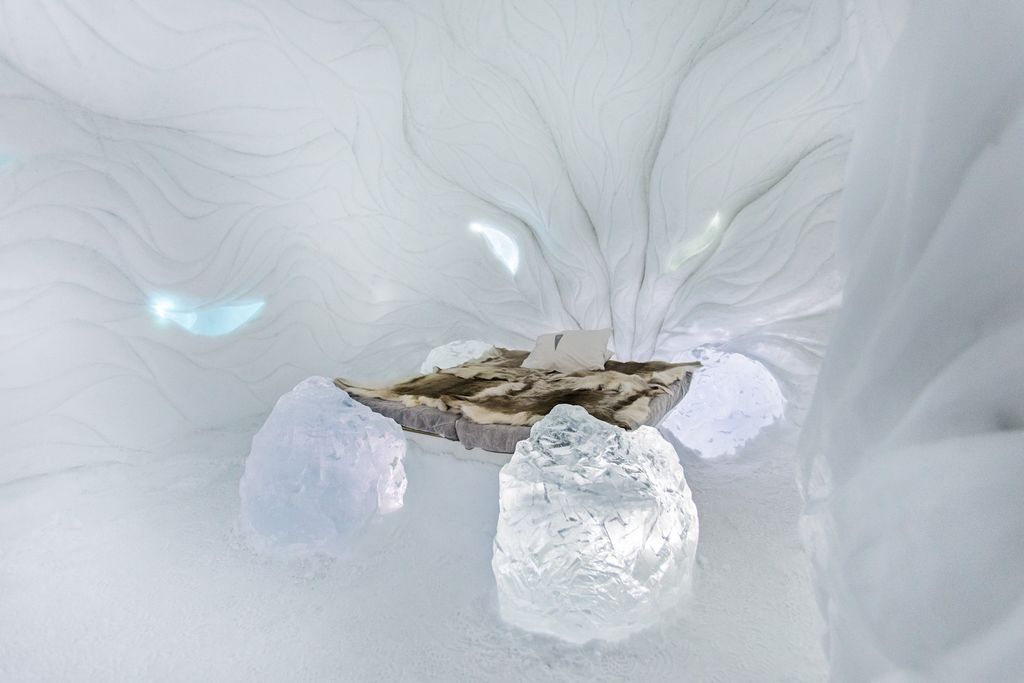 Hospitality attracts people longing after a personalised place for recreation. Artistic vision, social and environmental awareness – the reasons for the “buzz” around hospitality are intriguing.

Actor Clint Eastwood saved a 19th-century Californian ranch from being turned into condominiums, preserving its ambience in the form of a welcoming hotel. Fellow movie star Robert Redford’s by now legendary Sundance Resort in Utah combines a skiing destination with environmental consciousness. Sundance also happens to be a place to meet like-minded friends, where the world-renowned film festival is a springboard for new talent.

And in the case of the Icehotel in northern Sweden, the snow and ice structure has become a monument of awareness of the damaging effects of global warming. A living work-in-progress, it is reborn each winter.

Former ABBA star and composer Benny Andersson created a glamorous, yet inviting, hub for the Stockholm arts crowd with Hotel Rival in 2003. He undertook refurbishment of an elegant 1930s cinema to combine a venue for concerts and dinner shows, with a hotel, bistro, café and bakery. Designer furniture and an art deco bar create an atmosphere of intimacy, where hotel rooms bear the signatures of film stars. Individually designed carpets and wall hangings build the visual brand which combines a contemporary feel with elements of mid-19th-century Swedish design.

In terms of concept, Andersson’s design is reminiscent of the 1970s and 80s heyday of Stockholm’s top night club Alexandra’s. With its sister club in Barbados, Alexandra’s became the creative hotspot for Swedish and international pop stars, actors and other celebrities, including the stars of ABBA.
But let’s start our journey with something closer to the core of hospitality – food and two celebrated Scandinavian chefs who set the agenda for a new level of social responsibility in hospitality. The product they deliver is a new concept for cooking and presenting food.

In the case of the Danish star chef of NoMa, René Redzepi, food is transformed into art. Redzepi shares the view of Ethiopian-born Swede Marcus Samuelsson, of New York’s Red Rooster, that fame or Michelin stars are peripheral. They also share the scope of the artist or the architect, as well as the desire to make a difference in a socio-political context. At a time when environmental issues are debated, chefs have the power to become change-makers, whereas a decade ago, they were mere servants in the kitchen.

NoMa in Copenhagen ranks as the best restaurant in the world. The waiting list for a table may be as long two years. The 50-strong team of chefs dare the connoisseur to test their prejudices in what is a food laboratory. Redzepi has documented a ten-year journey and a creative crisis in his book A Work in Progress, which combines three books in one and cross-references them. The journal comes in a package with a book of NoMa recipes and a Moleskine-size book of Instagram photos, providing the reader with unedited snapshots.

The book of recipes features photographs by Ditte Isager, which are good enough to exhibit at a cutting-edge art gallery. The foreword by Metallica drummer Lars Ulrich frames Redzepi in the same context as Jackson Pollock and Pablo Picasso. There are dishes containing fermented garlic, hay ash or hazelnut milk, as well as the sap, wood and shoots of trees. A dessert of “branches” – spruce and juniper needles mixed with flour and salt to a dough, rolled through a pasta machine and deep fried, and served with crème fraiche – is inserted among real flowers in a vase.

Three books in a box

At the heart of Redzepi’s philosophy is the connection to time and place, an insight gained as the result of a revelatory moment in 2004. During a trip to Greenland, he was caught in a snow storm and found himself reflecting on what makes the region unique.

“A dish should reflect the where and when of the guest. That, even today, is our mantra,” he says in a diary entry. In Redzepi’s kitchen, all ingredients are created equal to the point where he will use what most would throw away: vegetable peelings, meat trimmings, fish scales and guts.

To Redzepi, a Christmas tree is not an object of decoration, but rather a spice. He grinds dried spruce needles to a powder and sprinkles the aromas of the forest into cookie dough. Like his countryman, storyteller Hans Christian Andersen, he is appalled at the corpses of abandoned trees which appear in the streets after Christmas. Mourning 100 million fir trees being produced each season, he exclaims: “Imagine slaughtering a cow just for its horns!”

Redzepi is aware of the dangers of success hampering creativity. When the NoMa restaurant was recently redesigned, his vision was to place the food centre stage, rather than boast its status in the gastronomic world. “It is important that the space is not perceived as a superficial layer between the customer and the actual food experience,” he says.

This, however, is where the vision of Redzepi and Samuelsson differ. Speaking on the phone from Red Rooster, Samuelsson describes his recent ventures. They include a café at New York’s Lincoln Center, Ginny’s Supper Club in Harlem and a Swedish TV show which showcases regional gastronomic variations.

“To me, a restaurant is not equal to a two-course dinner; it’s a concept, an expression of people, combining drinks, music, art and food to add to the perspective of the guest. I wanted to expand the food dialogue in New York and explore what might happen if I opened a restaurant in Harlem. Maybe in the future I will try the same thing in Sweden – let’s say opening a gourmet restaurant in the suburb of Fittja eller Rosengård,” he says, referring to two of the most strife-ridden suburbs in Sweden.

The journey he describes is about social context. But it also is about stretching his vision to encompass his own roots and that of the neighbourhood itself. Samuelsson started his career as trainee at Aquavit on New York’s 54th street. He quickly proceeded to become chief executive at the age of 23, earning three stars in the Michelin Guide. Today, he is the author of the bestselling memoir Yes, Chef: A Memoir and the host of The Food Battle on Swedish television. The show scored record-breaking viewings during its first two weeks on air this October.

At his Harlem restaurants, Samuelsson embraces three heritages. His own Ethiopian background gains power from his Swedish upbringing and his current American platform. The Ethiopian spirit of food as an expression of religious ritual is essential to his philosophy. And he brings his passion for the arts into all of his ventures. African heavy metal, Swedish hip hop and American gospel join forces at his Harlem clubs with handpicked art by local artists. In addition, Samuelsson contributes his vision to New York’s Museum of Modern Art, as a member of the board.

Next year, the most fragile of resorts, the Icehotel in northern-most Sweden, celebrates its 25th anniversary. Here in Jukkasjärvi, artists and sculptors gather each November to construct a palace of dreams from ice, snow and “snice” (snow and ice) derived from the crystalline Torne River. The Icehotel stands for four months and is rebuilt to a new design the following season. Its icy rooms are lit up by expert designers and insulated with warn layers for the comfort of the hotel guests – 13,000 night guests and 25,000 day visitors.

Artistic director Arne Dahl trained as a sculptor at the Swedish College of Design. He arrived in 1993, fell in love with the ice and never left. Today, he manages the artistic projects and, as co-owner, enjoys developing the concept. In his view, Icehotel is a means to promote the use of ice as an artistic material, not just as a vehicle for decorative art. “I want arts connoisseurs to respond with passion and hotel guests to enjoy a stay out of the ordinary,” he says.

Not all reactions are positive. Dahl remembers the reaction provoked by his Divorce Room. “I had just gone through a divorce and decided to make a statement with a room that manifested dissent,” he says. “A crack divided the matrimonial bed and the room in two halves.” Only 10 per cent of the visitors liked it; the rest were perhaps understandably upset, given that the majority were couples.

A veteran in the business of hospitality and entertainment is Swede Alexandra Charles. In her new book Life is a Dream (Livet är en dröm), she tells the story of how an enterprising young woman created a hotspot in Stockholm in the midst of the 1968 students’ revolt. Inspired by Studio 54 and London’s Revolution, she ruled the Stockholm nightclub scene for two decades. In her position as club owner, she ended up a talent scout. She staged possibly the first drag-show in Sweden, After Dark, in 1977, a genre which at the time was limited to the then fringe gay scene. In addition, a sister club was founded at Barbados, where the likes of Mick Jagger and the ABBA gang partied.

Forty years later, Charles heads an international philanthropic organisation, which champions women’s health issues in Germany, Norway and Russia, and is about to open a branch in London. Her motivating force remains the same – to add a sense of wellbeing to people’s lives. Enjoyment of the arts remains integral to her core philosophy, as a key ingredient of a healthy lifestyle.

In the 1970s, Charles was a pioneer, combining hospitality with top-level entertainment. These days, business abounds with savvy women like her. And many feel the urge to bring an element of environmental awareness or philanthropy into hospitality. Echoing Samuelsson’s Harlem restaurants, Swedish star chefs Melker Andersson of the F12 Group and P.G. Nilsson, chef at trendy Sturehof, recently unveiled their plans for a gourmet restaurant and training programme for chefs in the multicultural Stockholm suburb of Rinkeby, to be installed in 2015 as a part of the new, hospitality-oriented Rinkeby Marketplace.

Hospitality in the 21st century has become the manifestation of dreams and visions. Crossing business ventures with artistic vision, strong personalities gain celebrity status in the process, or create a concept which itself is celebrated.