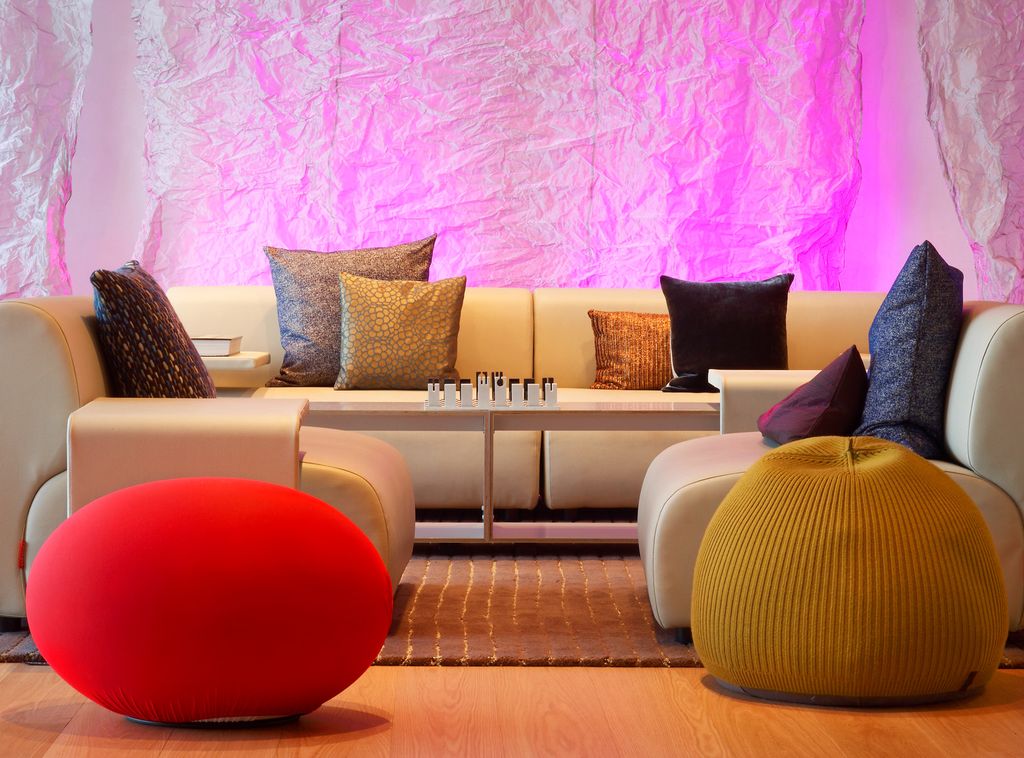 In the digital realm the division between our working and personal lives is constantly blurring. Malcolm Cossons explores how hotels are mixing business with pleasure

Colleagues are on Facebook pages, old school friends become LinkedIn contacts – the crossover between the social and the professional has a physical manifestation in the real world as well as in cyberspace. City spaces are adapting to become not simply meeting places, but to establish hubs that allow social and professional interaction, and the opportunity to experience the latest in the arts, design, music and dining.

Hotels have been at the vanguard of this change, transforming their public spaces from staid and quiet to cool and happening, with designers, artists and DJs ensuring hotel lobbies are destinations in their own right.

The W Hotels chain has been to the fore in introducing art and events into their premises to create spaces designed for socialising and conducting business, christened Living Rooms.

Ted Jacobs, the company’s vice president of brand design, explains the concept: “W burst on to the scene in 1998 when the idea of conducting business while not tethered to your desk was a novel concept. But nowadays, guests are mobile and want to be connected when on the go.

“W Living Rooms are specifically designed to facilitate everything from an intimate conversation to a DJ set or fashion presentation. Today’s traveller wants to feel like they can experience the destination, even if they can’t leave the hotel, so the Living Room provides them the opportunity to be out of their room, while still connected to a laptop or smartphone for business, as they interact with other guests or locals. It is the very idea of being ‘alone but not lonely’.”

To adapt that sentiment, the hotels are also seeking to make non-local visitors feel local, by drawing on the surroundings of each W venue to ensure it is intimately connected to its location. Jacobs expands on this idea: “In essence, each hotel is really reflective of its local environment. For example, W Union Square’s design has been inspired by the convergence of uptown meeting downtown, while W Times Square celebrates its exclusive vantage point high above Times Square. What you feel when you walk into the soon-to-be opened W Verbier is very reflective of the Swiss Alps après-ski environment. Our public spaces in retreats are very intimate, oftentimes smaller – a drastic change from what you feel when you’re in the Living Room of one of our bustling, grand-scale urban hotels such as W Barcelona or W Bangkok.”

Hattie Fox is the on-site florist at ACE Hotel

W Hotels are by no means the only example of this trend, with smaller boutique hotels bringing a similar mind-set to their locations. Founded by the late Alex Calderwood, who sadly passed away recently, ACE Hotels has reinvigorated how public spaces are approached. Starting in the United States, with premises in New York, Los Angeles, Portland and Palm Springs, and a most recent outpost in London’s Shoreditch, the ACE chain has sought to redefine the idea of hotels by bringing creativity and individuality to the concept.

The Shoreditch Hotel, for example, takes full advantage of its proximity to one of the most creative areas in London. The building has reinvigorated the drab site of a former Crowne Plaza hotel, with the finished results drawing praise from all quarters – the architecture correspondent of the Financial Times hailing it as “a hotel pulsating with life and that has already, despite opening only last month and not yet being entirely finished, established itself amid the fast-changing local street scene”.

Art and design in W Bangkok

This is the result of the team at Universal Design Studio – responsible for, among many other projects, the Mulberry shops in London and Manchester, and other hotel projects, such as One Leicester Street in London’s Chinatown – who sought to create a simple design aesthetic that is recognisable through its clever use of space and materials.

The hotel’s public areas create a space that is perfect for both personal and social interaction, with permanent fixtures running from a local florist to meeting rooms fitted with a level of wifi and computer functionality to be expected from any business centre. These spaces are used by the hotel to run a cultural programme, co-ordinated by the in-house ACE Atelier, to ensure it is completely integrated with the thriving creativity of the surrounding area.

The public spaces, as defined by the curatorial team, are used as a “platform to showcase a diverse range of talent and disciplines, mixing burgeoning acts and artists with well-known faces and institutions. Based on the idea that on any given day there will be great music, inspiring art and intriguing projects, expect the weird and wonderful”. Some of the first artists to be exhibited are newcomers, Justine Ashbee and Sally England, with many others destined to find a place to show their work.

In addition to London, ACE Hotels is expanding further afield with a new venture opening in Panama City in December. Housed in the architecturally eclectic American Trade Hotel, the project is the brainchild of K.C. Hardin, co-founder of Conservatorio, a community-based organisation responsible for the restoration and revitalisation of the historic Casa Viejo World Heritage Site. The relationship with ACE was a natural fit, as Hardin says: “It was exciting for us to find people whose passion for the community was more important to them than the standardisation of their hotels across continents.”

Hardin has strong ideas which coincide with those of the ACE Hotel chain in other ways. He has a strong sense of how the building should be used: “The public spaces of the hotel are open and should be used by the public for multiple purposes. During the day the feeling changes from a more working environment in the early mornings and afternoons to the evenings when things lighten up, and then you have that more sombre, ‘final cocktail’ feeling at the end of the day. In a luxury hotel like ours, it’s very important to create private, intimate spaces where the guests can feel they have a special place to meet.”

His ideas on the role of the hotel within the local community have seen the American Trade Hotel instigate a variety of projects that make it a catalyst for creativity, while becoming a means of introducing Panama City to hotel guests. “I would say some of these things would be impossible for a tourist or a business traveller to discover,” he says. “The hotel being a hub of culture in the city and hopefully the region eventually, and if you stay there, these doors will open for you.

“If you are a photographer, for example, it is one thing to look at the interesting photography collection showing the area that we have hanging in the hotel. It is a whole different thing for a local photographer, who is an ex-gang member, to take you for a walk around the neighbourhood and show you things that he thinks are interesting, and allow you to see the place through his eyes.”

A further project is a long-standing relationship between Grammy-winning Panamanian jazz musician Danilo Perez, whose charitable foundation dedicated to training young, up-and-coming musicians is housed directly opposite the hotel. Musicians will have the opportunity to perform at the hotel’s jazz club, while guests will be able to visit the foundation to either listen to or participate in performances.

This sense of the hotel acting as a hub for the creative community is echoed by others. Since opening in Amsterdam in 2008, citizenM Hotels have adopted a similar policy of bringing the local creative community into their hotels. Conceived with the philosophy of affordable luxury, their premises offer, in the words of Robin Chadha, chief marketing officer and co-founder, an “oversized living room created by a ‘mobile citizen’”. This model also makes sure that culture and local artists are incorporated in the hotel, creating a hub for the community and a resource for guests.

As Chadha says: “citizenM aims to be a good neighbour and we try to tie in to the local community as much as possible. Art and design, of course, are part of that. We work in Glasgow, for example, with the Glasgow School of Art, while in London we have created relationships with the Tate and with Frieze Art Fair. We also commission a site-specific work for each hotel – with citizenM hotel London Bankside, we worked with London-based artist Mark Titchner, who created an artwork on the exterior of the hotel.”

Hotels are also starting to expand their projects to utilise the public spaces of other institutions, effectively expanding their public spaces and facilities for guests. Modelled on the exclusive membership clubs of concierge services, such as Quintessentially, Le Méridian hotels have instigated a project called the Unlock Art programme. This is an extension of curated art projects, such as live debates in Le Méridian hotels, and allows guests to access cultural institutions. From the Secession in Vienna to the Palais de Tokyo in Paris and the Tate in London, hotel guests can use their artist-designed key cards to access the museums. In London, for example, the collaboration with the Tate has led to the creation of bespoke films to guide visitors thought the art world.

Sculptural exterior of the Serpentine Sackler Gallery in Hype Park

The model that hotels have adopted for creating spaces suitable for business and leisure has also been adopted – and adapted – by arts institutions. From the National Gallery to the V&A, most major museums and galleries have grasped the importance of maximising their spaces as venues for both late-night public views and private events. Exclusive access is an ideal way to attract new sources of revenue, while offering business a perfect location for forging partnerships in a social environment.

One of the most sought-after venues in London at present is the new Serpentine Sackler Gallery in Hyde Park, which marries an old park building with a new structure from Pritzker Prize-winning architect Zaha Hadid. What is interesting in this instance is that the Hadid building is conceived to be a permanent restaurant-café and shop with the aim of allowing visitors to enjoy and integrated experience combining contemporary culture, good food and affordable design under one roof. The same space offers a spectacular setting for events, as the Serpentine says, “ranging from Champagne breakfasts, cocktail receptions and elegant dinners to corporate parties and product launches”.

What the private event gives to the gallery is the introduction of a new audience and a valuable means of increased revenue. With only 18 per cent of the Serpentine Gallery funding coming from the government, the income raised from events is crucial for this not-for-profit institution. From the perspective of business, a recent event at the Serpentine Sackler Gallery, launching a new collection from the fashion label Chloe, underlines how companies seek affiliations that reflect their own ethos. A luxury fashion brand entertaining in a Zaha Hadid building, surrounded by cutting-edge art, can only ever be a great fit in terms of creativity, innovation and prestige.

Art galleries and hotels are just two examples of how, in the most creative manner, the use of public spaces is being reinvented

Art galleries and hotels are just two examples of how, in the most creative manner, the use of public spaces is being reinvented. From events at the Serpentine to DJs at ACE Hotels, these venues have becomes hubs for everything from entertaining and socialising to conducting business and networking. What is fascinating is how these converging activities are now being catered for, all in an environment infused with art and design, be it a hotel lobby or a white-walled gallery.