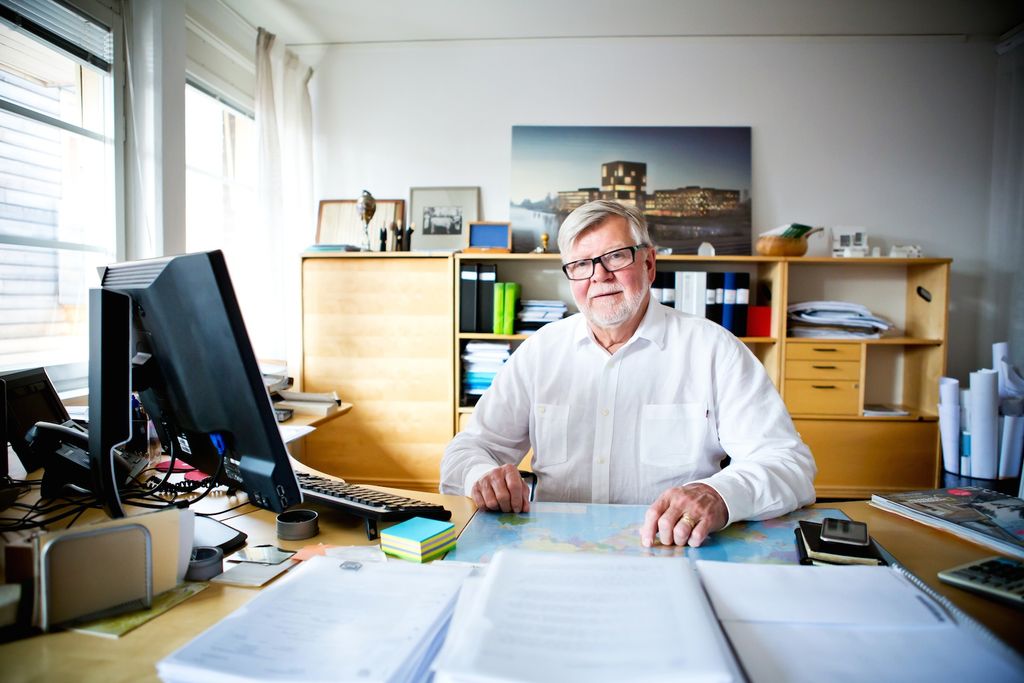 Over the last 44 years Umeå has changed and developed dramatically. Artworks meets Krister Olsson, the man who has helped along the way.

Krister Olsson seems to have exactly the same passion for his sculpture park in Umedalen as he does for the company he founded and still owns called Balticgruppen. Indeed, it could even be said that one of his greatest passions in fact, is Umeå. It is a well known phrase, “what’s good for Umeå is good for Balticgruppen,” and it sounds both a little cheesy, and a bit like hundreds of other companies’ empty tag lines. But after closer inspection and consideration it appears that it might actually be true.

Such is his golden reputation, it inspires a certain amount of cynicism and scrutiny. It doesn’t seem likely, or even possible that such a prominent businessman and philanthropist wouldn’t have something to hide, but further investigation only results in more evidence that you can succeed and be a good guy. Also that he bears a slight resemblance to Richard Attenborough in Jurassic Park.

Born in 1943, he was very close to his parents and grandparents, “My Grandfather was my kindergarten when I was little,” and as a teenager he shared his father Gunnar’s enthusiasm for flying, earning his flying certificate when he was 17. Gunnar was an entrepreneur with businesses in plumbing as well as part owning Norrlandsflyg and Krister would probably have gone on to pursue his plan to become an airline pilot, but for a tragic plane crash in which his father died in 1963. He was only 20.

Nonetheless, he took responsibility for the businesses although pretty soon closed all but Olssons Värme, a plumbing company, which grew throughout the 1960’s and would later evolve into Balticgruppen. It wasn’t the only thing to develop at this time, “In the 60s my interest in architecture started and during the 70s I got more and more interested in Sami handycraft.”

Krister eventually moved to Umeå in 1970 from Storuman where he had grown up on a farm that had everything he had ever needed. He had met his future wife Karin in 1964 and she applied for a job in social services in Storuman. Yet despite being the only candidate with the appropriate qualifications she was not given the job. The chairman of the committee thought one income per family was enough, which made Krister furious, so he rang Karin and told her he would be with her the next day, 230km away in Umeå.

This strong reaction to something that simply wasn’t fair, in his mind, seems to have been one of the defining moments in both his personal and professional life. It is an example of great integrity, which is such a strong part of his character.

After marrying Karin a year later in 1971 they had three children during the 1970’s, Johanna, Jonas, and Markus. Krister began exercising the same integrity in Umeå as he had in Storuman. After selling Olssons Varme in 1979 he set up Nordror in 1982, which would become a major competitor.

In fact it was with this company that Krister was able to break up a cartel that had formed within the plumbing industry in Umeå. A new rehabilitation centre with a hot pool was being built in Savar outside Umeå by the Swedish national health service Landstinget. When the contract for the plumbing was put out to tender Nordror’s quote came in so much lower than the rest the technical director in charge felt compelled to call up and check it was even correct. It was, and Krister took exception to the other suppliers, “I have never liked cartels and have never been part of one. I always try to avoid people who don’t look at ethics and morals the way I do. My parents and grandparents taught me from early childhood to live up to what I promise.”

It is not insignificant that his success and that of Balticgruppen is built on ethical practice. There are too many examples of cutting moral corners to mention, and the frequency and variety of corporate scandals always seems to increase. In fact it is all to common to hear that bribery and corruption is so ingrained that nothing can be done about it. Change has never been something Krister has been afraid of though. Sometimes it has involved making tough decisions in order to make companies work, and also developing business in areas where he had less experience or in other countries, such as the US, the UK, and China to name but a few.

The company evolved from plumbing and grew to include pulp mills, bookbinding, window and door making, forklift trucks, and property developers at different times, the latter of which has become a major interest.

Albeit in another form, Krister’s refusal to accept things he doesn’t agree with took shape in Balticgruppen’s acquisition of the old mental hospital in Umedalen in 1987 for just over 18 million SEK along with four other partners. The site had over 1000 patients at its peak and had developed a terrible reputation, but this didn’t phase Krister at all. His appetite for creating positive social change has been a powerful influence on the area and the whole of Umeå. “We made all the planning for Umedalen ourselves. It was the first time this had ever happened in Umeå.”

The other partners were eventually bought out in turn leaving total control to Balticgruppen, which perhaps resulted in a major development both for Krister and Umeå. “Over the 80s I developed a growing interest in painting and pictures, which lead me to Stefan Andersson, part owner of Galleri Andersson Sandstrom. Through him I learnt more about sculpture and since then sculpture has become one of my main interests.”

He opened the sculpture park in Umedalen in 1994 and Balticgruppen have amassed a collection of over 40 sculptures amongst the almost 200 Swedish and international artists whose work has been exhibited in the last 20 years. Most importantly the park now attracts over 20,000 people a year and is free to visit every day of the year. “The sculpture park made a tremendous difference in how people looked at the old mental hospital area. We washed away the old trademark and created a new one. A great success!”

The old hospital is now a home to schools, offices and also a luxury spa, and it is now a strong cultural hub, something which is evidently very important to Krister, “The arts and culture are essential to any society and Umeå is no exception. There are many ways for companies to take part in culture both a participants and consumers. I think Umeå is the city where most tax money is spent on culture per capita in Sweden.”

He seems very proud of this, but he is actually being hugely humble. Since 2004 Balticgruppen, as well as Krister personally, have invested huge amounts of money in the arts and education in Umeå, creating the Arts Campus including the world renowned Institute of Design, the museum of contemporary art and visual culture, the digital experimental workshop HumLab-X and the school of Architecture, all in connection with Umeå University. They are also a 50% owner of Umeå’s new house of culture, Kulturvaven, which they are developing.

The slogan, “what’s good for Umeå is good for Balticgruppen,” certainly rings true. “Culture makes people and societies grow and that is easy to see in my home town.” He is eager for Umeå to continue growing, “It is necessary for our growing need for schools, medical care and social care, and cultural development. We need more people with good, steady jobs paying their taxes to be able to afford all that. I think we are growing by 5-6% per year today and I think we need to grow more and faster.”

Krister’s interests across the arts, business and society neither seem isolated nor strategically intertwined. Moreover, they come from genuine interest in real progress for as many people as possible. There’s always a consideration for mutual benefit, “I think all our support to culture in Umeå pays back eventually,” but it doesn’t seem to be the motivation. “Arts and business should never be kept apart. We need each other to make our society grow and prosper, but you can never and should never try and demand anything from the arts and the artists.”

His respect for artists and the arts can be linked to his deep rooted observation of ethics and morals that were inspired by his family. “I have never practiced any form of the arts, but I can see many similarities in the way artists and entrepreneurs think, and that is good enough for me.”

His interests are spread quite evenly across his three children. As he is beginning to take more of a back seat in the running of Balticgruppen, his sons Jonas and Markus have become the managing directors of the property and holding parts of the company respectively. His daughter Johanna meanwhile is working for White Arkitektur, but has collaborated on several projects with Balticgruppen.

With his family helping to run the business he founded and still owns the majority of, and his interest in Umeå’s cultural and economic development, it doesn’t sound like Krister will be slowing down anytime soon. “We keep looking for more sculptures to buy!”