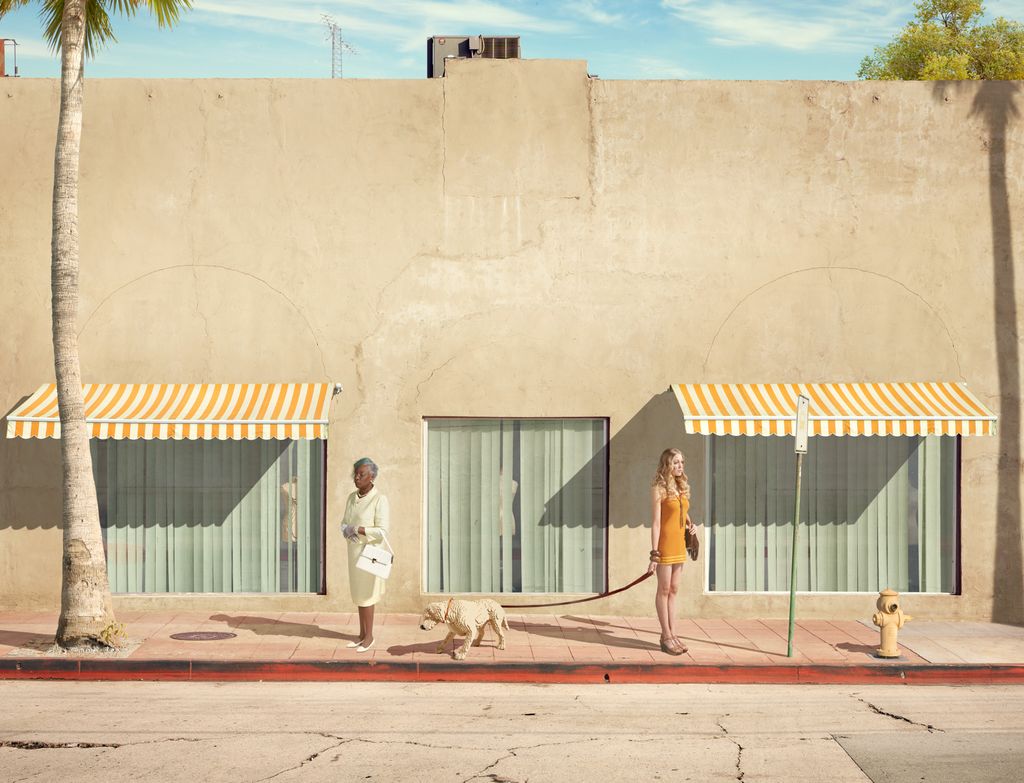 ON YOUR MARKS, GET SET, LEGO

As a “temple” to LEGO is being built at the company’s Danish headquarters, collaborations with Google are helping to propel the familiar plastic bricks from childhood play to an adult art form, capturing the hearts and minds of grown-ups, writes Sofia Nyblom

In our globalised world companies are challenged to build a brand with such care that it will hold strong against deconstruction. Coca-Cola, IKEA, Apple and Google use marketing ploys to tap into the playful child within us. LEGO, however, doesn’t need to; even to adults the essence of LEGO is play. Lawyers do it, architects do it, artists and choreographers do it: they fall in love with LEGO, time and again.

In Pieces series by Nathan Sawaya and Dean West

American artist Nathan Sawaya, a former corporate lawyer who seven years ago turned from business to LEGO art, epitomises the LEGO spirit. His exhibit The Art of the Brick currently appears at several venues around the world – the latest one in New York being the largest LEGO art display ever. “The overarching theme of my work is my desire to inspire people to become artists themselves,” says Sawaya. ”Art is necessary. And it makes people happier.”

Sawaya played with LEGO with his sister, filling the living room with a sprawling LEGO city. “LEGO is such an accessible medium. Other materials are more forbidding – people are hardly going to chip away at a marble slab at home after seeing a sculpture exhibit. But they clearly are inspired to build with LEGO,” he says, testifying to the number of fans reporting back.

The overarching theme of my work is my desire to inspire people to become artists themselves. Art is necessary. And it makes people happier.

To Sawaya, the revelatory moment arrived at age ten, realising that LEGO needn’t be what’s on the box. “I wanted a dog, and my parents told me I couldn’t have one. Instead, I built a life-size dog in LEGO. So it followed that if I wanted to be a rock artist – I could build a guitar, and so on.”

The latest follow-up to Sawaya’s work, a photo exhibit created jointly with award-winning photographer Dean West, used LEGO to create tableaux reminiscent of Edward Hopper or René Magritte. A red LEGO dress, draped on a 1950s-styled model, or a LEGO umbrella sheltering a businessman on a deserted street are dreamlike, surreal images.

The example of Nathan Sawaya proves that the notion of LEGO making the leap from toy to artistic material isn’t so farfetched. Much as Roy Liechtenstein elevated the comic strip to art, and Andy Warhol adopted popular icons to comment on consumerism, Sawaya’s LEGO sculptures seem to comment on the question of identity. If, as Sawaya’s iconic work Yellow suggests, our imaginations are built with LEGO bricks – a piece of plastic filled with air – what nests at the core of the human soul?

And Yellow poses another question: how dependent is an artist like Sawaya on the endorsement of LEGO? He sees no reason to attempt other materials and proudly wears the title LEGO Certified Professional. The title is bestowed by the LEGO Group on a total of 15 artists globally whose approach click with the brand. Thus, Sawaya will hardly deviate from the naive character of his sculptures, coherent with the LEGO brand, and turn to the more twisted playfulness of, say, Jeff Koons.

LEGO also inspires the performing arts, as the dance piece LEGO Love by Austrian Chris Haring testifies. Premiered in July, the piece explores the playfulness of LEGO by adopting the adult perspective of myth. After all, play is equivalent to the abandon of the bacchanal, Haring reasons.

Using the dancers as though they were LEGO pieces, the choreographer comments on the sexualisation of the human body. Although alive, the soulless motions of bodies writhing in a variety of formations make lust and love seem purely mechanical. “LEGO Love is rather taking off from Lego than using it,” dramaturge Andreas Spiegl says. “In relation to love, clearly it has an ironical subtext.”

Haring’s dance and performance company, Liquid Loft, has seized upon a method of working which parallels LEGO in modular thinking, building and rebuilding in different contexts. LEGO Love recognises the obsession involved in playing with LEGO. An obsession framed with irony, due to the static, inorganic nature of the brick itself. So, when the dancers enact LEGO Love, they transform the inorganic material into human desire, a dance between LEGO and love.

Post-modernist would be the appropriate label for architect Bjarke Ingels, the Dane on a mission to reinvent architecture. Ingels credo, Yes is More, published in the format of an “Archicomic” comic book, holds a vision of unbridled imagination. Ingels was the natural choice for LEGO’s next big project, LEGO House, which is being built to mark LEGO’s 60th anniversary in 2016 of the invention of the plastic brick. The company announced their plans to mark the occasion last June by inaugurating a museum in Billund, as an expansion of LEGOLAND. Ingel’s concept for LEGO House can be viewed in an online animation, but neither LEGO Nor the architect will offer any further comment until the project has progressed further.

While another imaginative contemporary, Frank Gehry, favors to the spiral, the pyramid has become Ingels’ trademark. This also holds true for LEGO House. Thus, labelling it a “temple” to LEGO is appropriate, as the promotional images suggest ancient Maya temples, with LEGO treasures revered at the heart of the building, underlining the iconic status of the toy. “It’s going to be looking at LEGO from all its different aspects – LEGO as an art form; its cultural impact,” says Ingels.

In a video produced by BIG, Ingels comments on the background to an earlier project, LEGO Towers, built out of 250,000 bricks for the Storefront for Art and Architecture in 2007. And he doesn’t mince words in his critique of modern architecture: ”The demon,” he claims, ”which killed off imagination, is functionalism.”

Anyone who has visited Denmark realises how much LEGO has been inspired by the crow-stepped gables of its medieval churches, while also reconstructing the generic functionalist police station or fire station. But contemporary LEGO has moved on to embrace functionalism as much as the fantasy worlds of Star Wars and of medieval legends. Ingels’ LEGO House promises to open doors to both.

Is Google the digital equivalent of LEGO?

Even the name indicates the Google search engine’s indebtedness, incorporating the same letters, yet reinforcing visual perception with the allusion on “looking” and “goggles”. Google founders profess to key childhood experiences with LEGO, as evidenced by a recent blogpost by Google founder Larry Page. ”When I was young, I really liked playing with LEGO and eventually got some ’expert builder’ – the ones you can actually make just about anything out of [Technic]. In college, I built an inkjet printer out of this LEGO and some electronics.”

But the connection between the two brands transcends Page’s anecdote. Google has always looked to LEGO, as creative director Tom Uglow, Google Australia, asserts. “The ability of LEGO to unlock the imagination is a constant source of inspiration to Google engineers,” he says.

Uglow is the key actor in the team behind Build-with-Chrome, a project launched in 2012, which recreates Google Maps in 3D LEGO and enables users to build their own fantasy world online with animated LEGO bricks. The creations range from animated Valentine’s to the construction of the Sydney Harbour Bridge. “We wanted to create a metaphor for the opportunity of making anything you want out of the web,” Uglow says. “A metaphor emulating the speed and magic of the Chrome browser, LEGO fitted the description perfectly – an iconic toy matched to the iconic Chrome browser.”

Back in 1998 when Google was still a student project at Stanford University, the founders needed more storage space. Connecting several different servers, they built a gigantic computer case out of LEGO. Since then, Google has presented celebratory LEGO logos as online homeage Doodles and commissioned a live Google logo out of LEGO for its New York office.

Uglow headed a small team, who in a matter of less than six months made Build-with-Chrome happen, using complicated HTML5, Java Script and HGL, that enable browsers to create 3D graphics. “It was a wonderful challenge on a creative level to recreate LEGO digitally and emulate the sense of ’clicking’ when you fit one brick to another on the site,” Uglow says. “The target group for the project was Australia. Since the launch, the website has been visited by 3.5 million people and 150,000 have built projects, sharing them with users worldwide.”

As the brand gets older, it never seems to loose its touch, embracing the arts, technology, architecture and the business world

With its Mindstorms digital range, controlled by a ”smart” brick with accompanying software and wiring, LEGO continues to keep up with new technological developments. While always appealing to the next generation of incredibly tech-savvy children, LEGO is increasingly helping its older fans, or AFOL (Adult Fans of LEGO), to stay young.

Just recently, the company invited Autodesk, Facebook, Pandora and Flikr in San Francisco to design and build their own robots to get children excited in the toy-technology hybrid. The winners, Pandora, created fully automated, pitching and batting robots, dressed in local baseball team shirts.

So what will the next generation of LEGO be? As the brand gets older, it never seems to lose its touch, embracing the arts, technology, architecture and the business world, while remaining true to the childhood favourite, loved by so many. So it continues to build its empire, brick by brick…

Work from the Art of teh Brick exhibition