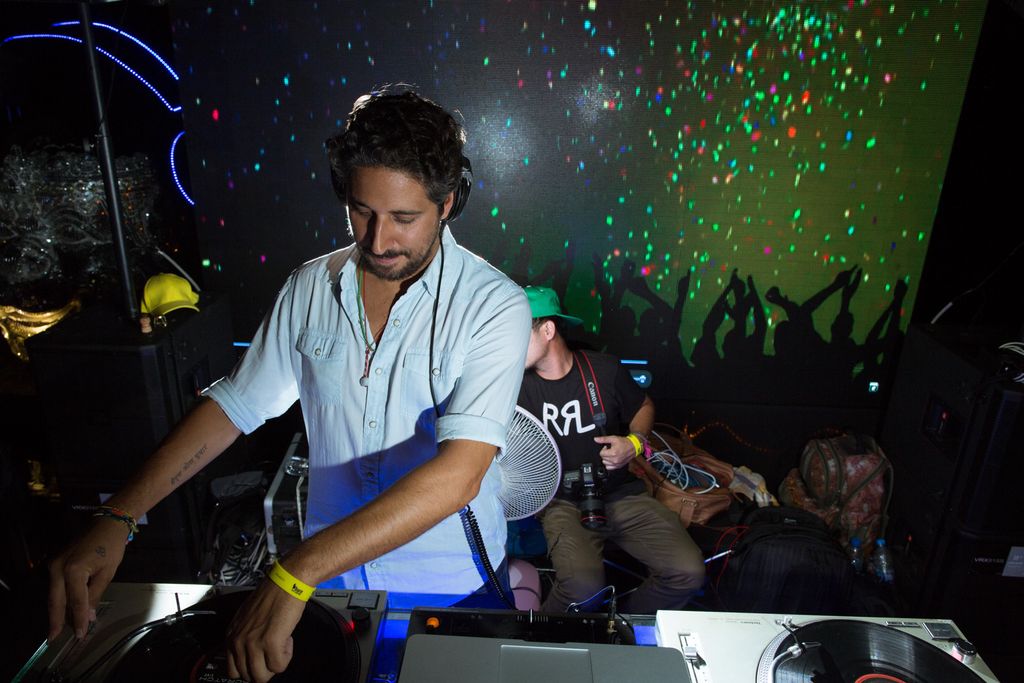 MUSIC IN THE KEY OF W

Markus Nonn talks to Michaelangelo L’Acqua, global music director of W Hotels, to discover how you determine the sound of a brand

The lobby at the W hotel in Leicester Square seems like it has been designed in memory of the site’s former occupant. A panorama of the Swiss Alps dominates the space and the walls are covered with photographs which, when viewed from a distance, resemble the famous white cross on a red background of the Swiss national flag. Indeed, for many years the site was home to the Swiss Centre, a modernist development, dating back to 1968, conceived as a showcase for Switzerland and all things Swiss.

When it was demolished in 2006 the run-down, asbestos-ridden complex had been vacant for years. Its former owners, the Swiss banking corporation, had sold it to a private investor, who redeveloped the site and secured a deal with the American corporation Starwood Hotels to open one of their hotels here. The opening in 2011 marked an important cornerstone in the urban renewal of the entire neighbourhood.

However, the fur blankets and hot chocolate in the hotel lobby actually look towards the future as the latest addition to a growing portfolio of hotels in the Americas, Europe, Asia and the Middle East is going to be in Verbier in the Swiss Alps. The resort will be the chain’s first alpine and ski retreat when it opens its doors this December.

This was the location for the finals of a European-wide online competition to find a new resident DJ for the inaugural season at the Verbier resort. It is here that I meet Michaelangelo L’Acqua, W Hotel’s global music director, who flew in from New York to head a panel of judges tasked with finding the most suitable contender.

“It felt like I was one of the X Factor judges,” L’Acqua jokes. “They were all very talented and lovely people, but we could only pick one. The other day they were hanging out with their friends here in the lobby and invited me to join them for a drink, but I had to decline. I had to send all but one of them home the following day, so I didn’t want to get too attached.”

Liz Mugler, a former actress, TV presenter and model, was voted the winner and flown out to Verbier to join the team ready for the opening at the beginning of December. “Liz is an amazingly talented DJ with a very unique and soulful mixing style when she plays, and her technical skills are beautifully matched by her extremely well-thought-out song selection,” says L’Acqua.

Settled on a sofa by one of the fireplaces, he has a relaxed attitude, but a demanding job that sees him travelling around the world on business most of the time. Discovering new DJ talent is one of the more fun aspects of his busy work schedule. “I’ve just returned from Bangkok,” he says. “We did a very similar event over there in co-operation with Coca-Cola called the W Hotel & Burn DJ Lab, a competition and mentoring programme for up-and-coming DJ talent. Participants took part in a ‘boot camp’ at the W Retreat in Koh Samui, followed by the opportunity to perform in front of newly added programme mentor Paul Oakenfold in Bangkok.”

It’s part of the W’s ongoing commitment to discovering and nurturing new musical talent, and giving them a platform to perform and launch their international careers. Electronic dance music and DJ culture is just one of the facets of the brand’s engagement in music.

The W Hotel’s Symmetry Live Series is another. New artists are invited to give exclusive performances to select audiences of 200 to 300 guests at one of the hotels. Ellie Goulding performed at the San Francisco W back in 2011, to much acclaim, which made some contribution to launching her career in the United States after her success in the UK.

According to L’Acqua, live gigs are a lot more challenging in terms of logistics and budgets to organise. However, they form an important cornerstone of the brand’s sonic identity.

“Music you hear in and around the hotel is part of a carefully curated soundscape,” he says. “It’s a lot more crafted than you may think at first. Music follows you throughout the day, sometimes it’s more in the background…” (he pauses for a second to listen to the soft and chilled-out sounds that fill the lobby) “… then it picks up and takes centre stage.”

Since L’Acqua joined over four years ago, the company has seen a tremendous growth of the brand from 26 properties in 2009, mostly in North America, to more than 44 W locations around the world at the end of 2013. Such global expansion brings challenges. How do you ensure staying true to yourself, while at the same time respecting and incorporating local cultures and traditions?

“Anything pre-recorded you hear at the W comes from a central server in New York that hosts the W’s entire music collection,” he says. It’s a clever way of guaranteeing continuity of the brand throughout the various locations. “The live performances and our selection of resident DJs allow us to respond to individual contexts, and add local flavour to the different destinations.”

However, there may be limits to this concept. “Electronic dance music arose in Detroit from where it spread out to New York and London. Besides that the Asian market and China, in particular, are still very much geared toward the West.” For how much longer this assumption persists remains to be seen.

But what does the W actually sound like? For L’Acqua it’s probably too easy a question. Having shaped the musical identity of the hotel for almost half a decade, he recognises instantly whether a new song or artist he listens to fits the bill or not. “It takes just a few bars, a fraction of a song, a few elements of a sound to decide,” he explains.

“When creating a sonic identity for a brand – any brand – I would usually start by looking for the passion points: the reasons for this brand to exist. Based on that we build a customer profile and ask ourselves which music and which artists they would listen to.”

L’Acqua honed this craft as a music lifestyle creator during his time as music director for Gucci and Louis Vuitton more than ten years ago. In order to curate music for fashion shows, he would frequently collaborate with the designers. Fabric samples or colour charts and the emotions they might trigger often formed the starting point of a conversation. Based on this he would come up with a sonic palette, similar to visual mood boards designers and architects work with.

The desktop of his computer still contains folders labelled after fashion designers from Ralph Lauren to Diane von Furstenberg. Whenever he hears a tune that chimes with one of the names and the brand values they stand for, he saves a copy in the respective folder.

As an artist, you can be a vehicle of expression for a client’s message

Creating the W’s unique sonic identity follows a similar path. When considering the new Verbier Retreat, he relied on sketches and renderings provided by the architects. “The mood I sensed for it is somewhere between James Bond and Dr Zhivago, which will be somewhat reflected in the sonic identity of the place,” he says.

“One thing I had to learn when I started this role was to keep back my own artistic tastes and make way for Tom Ford’s artistic direction. I was there to help bring this vision to life. It’s almost like unfolding a musical tool box to pick and choose from. What’s important for me is not to define myself because that would negate all other possibilities. As an artist, you can be a vehicle of expression for a client’s message.”

He compares his role to that of a producer, like the great Quincy Jones, who helped numerous stars to fulfil their potential while seemingly staying out of the limelight; like a sculptor who removes material to bring out a piece of art hidden within a block of marble.

At the same time, L’Acqua is a fully fledged musician and artist himself. Trained as a violinist from an early age, he begun listening and playing bebop as a teenager to shake off the image of the skinny nerd and hang with the cool kids instead. He is a graduate of the New School of Jazz and Contemporary Music in New York, and played in various jazz bands before taking the job at Gucci.

Prior to his engagement, the W’s musical programming was in the hands of Sony Music Entertainment. Since taking the helm in 2009, L’Acqua has managed to build the brand’s own proprietary music platform without ties to any of the major labels, meaning greater creative freedom and independence and a sharper focus on the brand.

However, artistic supervision and curating is just one of the many hats he wears in his role. Besides this he takes care of administration and most of the contract negotiations, leaving little time to actually listen to music.

When he does, it’s usually while travelling. “London Grammar is on top of my personal playlist right now,” he reveals. “It’s quite intense, emotional… a counter-balance to the light-hearted and energetic tunes at the W,” he says while getting up from the sofa, ready to dash to his next engagement, an interview with New Order as part of the London Electronic Arts Festival.