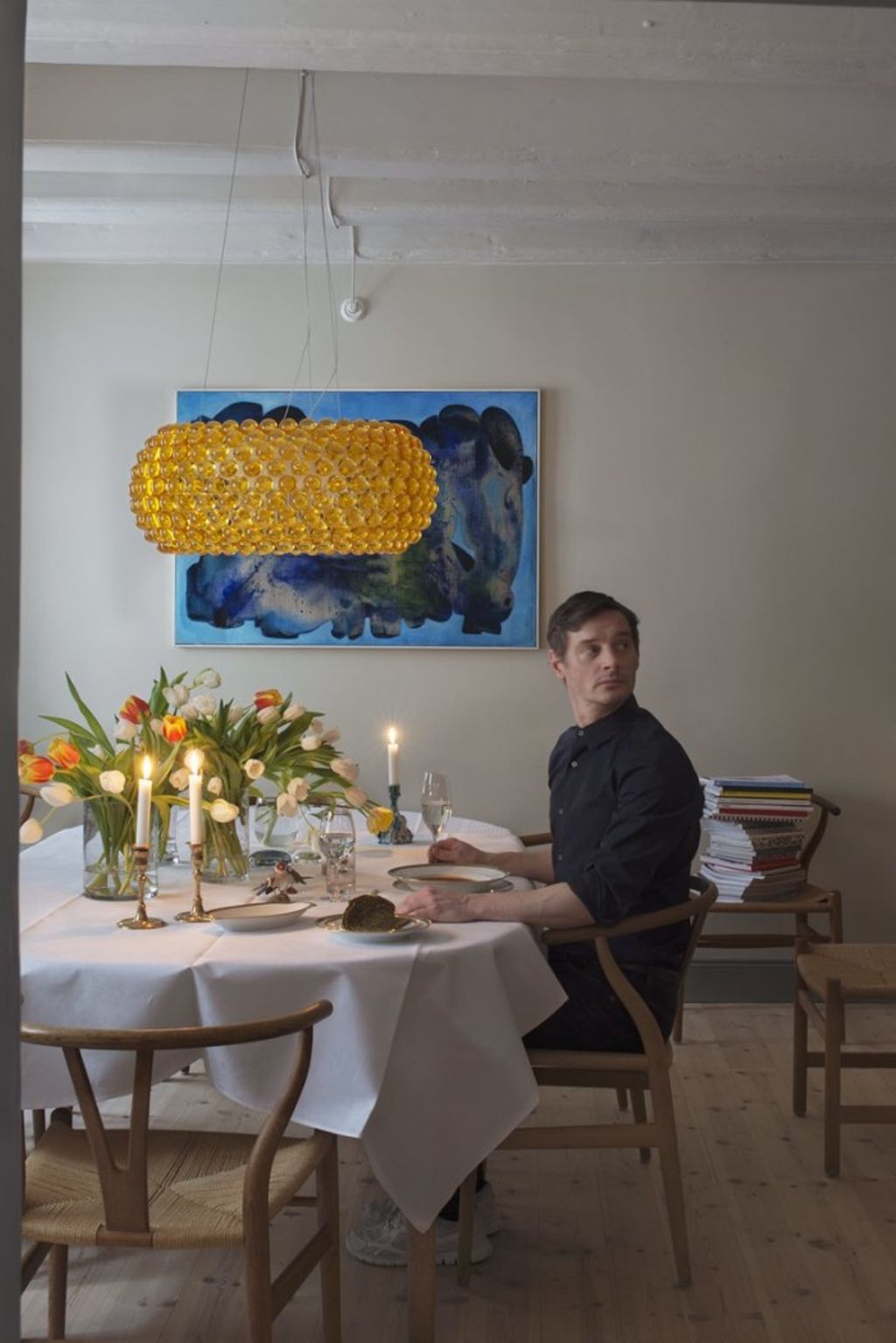 Andreas Ackerup rose to fame after a series of “selfies” back in 2008. Today, he is exhibiting a book and beautiful photographic work captured in Greece and Spain. We met with the artist.

46-year old Andreas Ackerup has been interested in photography since the age of 17 when he discovered photographer Mikael Jansson's pictures. Andreas considered Mikael’s images interesting as they had an international approach. Soon, he was running around collecting the fashion magazines where Mikael’s images appeared. Mikael was later in life going to play an important role in Andreas' career, ssxs÷spending almost five years as his assistant before leaving to pursue solo work in New York.

Mikael is very thorough. He has a strong artistic understanding and business acumen. Everything is conducted at the most professional level, which no doubt has brought him to being among the world’s biggest photographers within fashion.

So what about yourself, do consider you being a photographer or an artist?

I regard myself as a photographer. That’s my profession and what I make a living from.

You spelled out the word “selfie” long before it became an everyday parenting-issue around the world? But do you do selfies today?

20 years ago I started taking selfies to see if I could observe my own aging - one picture each day. One month became a year and without deeper reflection I had reached 10 years.

One day my good friend Henrik Nygren suggested that we make a book of my self-portraits. Naturally, I didn't feel entirely comfortable. Those pictures were not intentionally for the “public” domain. But I am pleased with the outcome -  3,650 pictures, in a tabloid book and an exhibition at Färgfabriken in Stockholm, in 2008.

I did continued my portraits, and now approaching two decades!

How do did you come up with such a crazy idea?

Simply, my curiosity with aging.

Could one compare your project with artist Jacob Dahlgren’s striped “t-shirt gig? Do you reckon he got inspired by you?

I have no idea to be honest. I wasn’t the first to invest the concept of self-portraits either (haha).

Do you have a favourite one?

No but I do find myself skimming through from time to time. It’s quite fun.

Are they for sale anywhere?

Not as individual portraits but you can buy my book for 365 kronor - 10 Swedish öre per picture! It’s published in an edition of 500.

Let’s fast-forward we’re actually here to check out your new show…Congrats what is this about?

In 2014, went to Amorgos in Greece to take some pictures. I returned with a whole bunch and became particularly attracted to ones of shrubberies. I'm not quite sure why but I posted the picture on my website. After just a few days a friend of mine got in touch and she he wanted to buy that red shrubbery picture. Perhaps it was possible to convey an emotion and thought through this type of motif? I posted yet another image of a shrubbery on my website and just a few weeks later the story repeated itself with someone else keen to buy the image. Naturally, it felt great and it sparked a new journey.

This time around the ticket took me to the Spanish island Lanzarote. The plan was to do something completely different but in the end, I came back with images of shrubberies, rocks, and small puddles of water.

With an additional bunch of images that I enjoyed, I contacted my friend Henrik Nygren to do another book. We narrowed it to 16 images to keep the project within an intimate and mindful scale.

The project is entitled Cogiatio and comes from the latin word for meditation, reflection, thinking, thought).

Exciting, so in essence we have a bunch of photos and a book. What’s the editions and how much are they?

The book is published in a series of 250 copies. The first 25 copies though are numbered in a unique coffee-table edition encased in a tailored, handmade box and accompanying a print, priced at 7,500 SEK. The rest of the books, in a grey cover, number 26 to 250 are priced at 700 SEK.

The prints are sized 75 x 50 cm, also them made on the Fujiflex material, are available in two different formats. Either you buy it as is, in the frame that I made, in which case the 1st edition of 5 + 2AP costs 38,000 SEK (the price goes up by 5,000 SEK each time a copy is sold, until the whole edition is sold out). Or, you purchase the photograph alone, if you want to frame it yourself, in which case it is mounted on aluminum. The price for one copy of the entire edition is then 25,000 SEK, rising incrementally with 5,000 SEK each time a copy is sold.

What stage in your work process gives you the biggest thrill?

In the past, I took photos all the time, wherever I went. But nowadays my process is much structured and methodological. I was sure it would suit me, but right now I am in a happy place.

If I have taken a picture I really enjoy, I want to make it as good as I possibly can. How do I want to present it and in what context. It feels a bit like a bark boat that you set afloat in a small creek and whose destination you can't quite predict.

The only thing I know is that if I do the work thoroughly, I will always be able to defend it; I am drawn to the subject and am committed to meticulous details all through to the picture being mounted and hanged on the wall .

Do you get inspired by other artists?

I like artists who have a tangible personal expression. They are plenty so tough to give you one. All of them have probably become a big mix inside of me, and perhaps Cogiatio is a result of that

Who purchase your are then? Who are your customers?

My customers are as mixed as the artists I am inspired by.

It's probably just people who feel something when they see a picture and sense that they want that bring that same feeling back home. Nice and simple, in my mind, and I am equally happy every time someone tells me they like an image. And sure, it is fun to sell them, too, but it gives me just as much pleasure to hear someone express fascination without buying anything.

I could never see myself pushing these images on people, they have simple been brought to life in case anyone want to see them or buy them.

Do you collect art yourself?

I have a modest collection. My purchases are spontaneous and never considered as investments. If I see something I like and I have the money, I buy it.

Your curriculum tells me you’ve been an ad-man, what could they learn from one another?

I have been in the advertising environment since I was in my 20s. Today I am 46.

I don't know if there is any specific lesson, they are both creative trades. Of course they derive inspiration from each other. Many artists work with advertising clients. I think there is a fuzzy blend of inspiration going both ways. Jeff Koons came originally from the banking world and look where he ended up as today. I can imagine he knows his advertising history well.

But will art ever be as commerical then as advertising?

I think it already is, though being an artist is by many regarded as something higher. But we have the same interests: a functioning economy – within all professions one has to create one's own currency. Some want a higher currency and some lower, because they value other things in life.

Finally, how do you get your daily dose of art?

Right now I am quite into documentaries about artists, musicians, philosophers, photographers, authors, athletes and so on. I take pleasure in old hazy black-and-white documentaries on YouTube.

Charlie Chaplin has for a long time served as a great source of inspiration. To come from practically nothing and successively use one's trial and error to captivate an entire world. 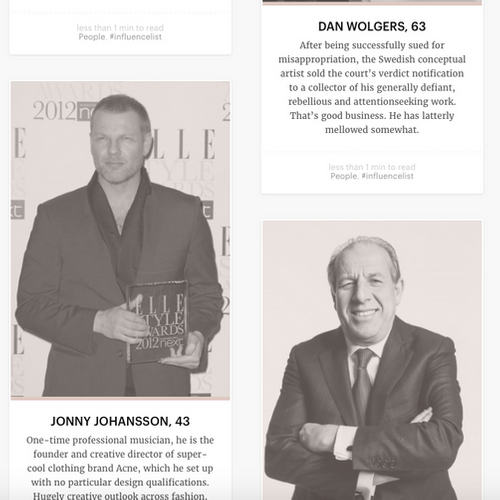