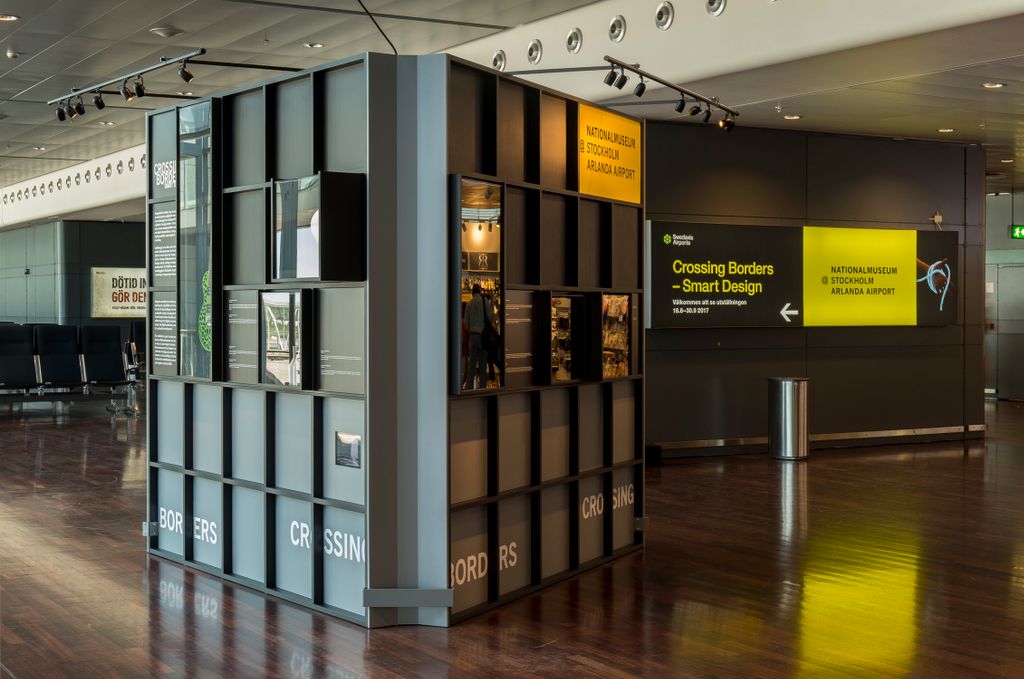 Objects from the National Museum’s design collection are on display at Arlanda. Successful in a quirky kind of a way, is the assessment of Artworks’ Jenny Danielsson.

The Site
Every year a staggering 25 million people pass through Arlanda Airport, north of Stockholm. A diverse bunch of holidaymakers combined with frequent business travellers, catered for by the airport’s owner, Swedavia. The airport is a giant transit hall, and it’s safe to say that many people spend quite a bit of time here. For some, this means time spent shopping. Judging by the stock of traditional food, and locally produced goods in the shops, it's all about the connection to Sweden. Maybe you picked up a reindeer hide or a jar of cloudberry jam last time you were at the airport. But, did you expect to find examples of Swedish cutting-edge design at the airport too? Probably not. But until the end of September 2017 you can.

The Display
A large three-sided showcase has been installed in Terminal 5. Cilla Robach, the curator of the National Museum, has selected the nine objects on display. All are examples of innovative Swedish design. The bicycle helmet with a build-in sensor, connected to your mobile phone, will sound an alarm and provide your location if you should happen to fall off your bike. This product, made by POC Sports, is only one example of a product connected to the internet. The same innovator presents a cycling jacket with a special back pocket made for a mobile phone. The phone is voice activated and indicates the next turn.   A video shows how Hilda Nilsson makes her 3D printed ceramics. A couple of her vases are on display too. A clever way of disposing of excrement also forms part of the exhibition. What looks like an ordinary plastic bag has enzymes inside, to help break down the waste and to turn it into a fertiliser. Peepoo, by Peepeople/International Aid Services can be left in the field after use. Considering the fact that diseases caused by contact with fecal matter are the largest killer of children in the world, this is a life-saving product.

Design can also help us become more aware of our behaviour. Here you can plug your phone into a power socket, and as it charges, the cord turns blue. It’s the Power Aware Cord, designed by RISE Interactive. Plug your hair dryer in and the blue colour will be even more intense. A smart and effective way of displaying the invisible power usage we are all so dependent on.

The Collaboration
The National Museum’s regular museum building, in the heart of Stockholm, is closed due to renovation. The installation of the design showcase is their second collaboration with Swedavia, who run ten airports around Sweden. The first Crossing Boarders projects took place a few years ago, and was a display of photographs from the museum’s collection. Like the first one, the current display will travel around the country.

Does it work?
On the National Museum’s website, you can read:

Does the display at Arlanda do justice to the entirety of the National Museum's collection? Of course it doesn't. The museum is home to about half a million drawings from the Middle Ages to the beginning of the 20th Century, and a prominent Rembrandt and Dutch 17th Century collection. Online access is provided to some 146 000 objects of the museum’s collection out of a total of 679 000 objects. This summer, the museum is collaborating with Gustavsberg Porcelain Museum, putting together an exhibition featuring works of Swedish designer Wilhelm Kåge. This is only an indication of the breadth of the museum's activities and I experience a degree of frustration about how little of this is on display. Understandably, an arrangement of this sort, without attendents and with a need to be portable, doesn't approach the specially designed spaces of a museum. Even so, I felt a bit disappointed. I would like to see the National Museum promote themselves more extensively. The exhibition could do with a bit of polishing. At any rate, let’s hope this project encourages more people to download their excellent app for further information and engage with the museum on every level.