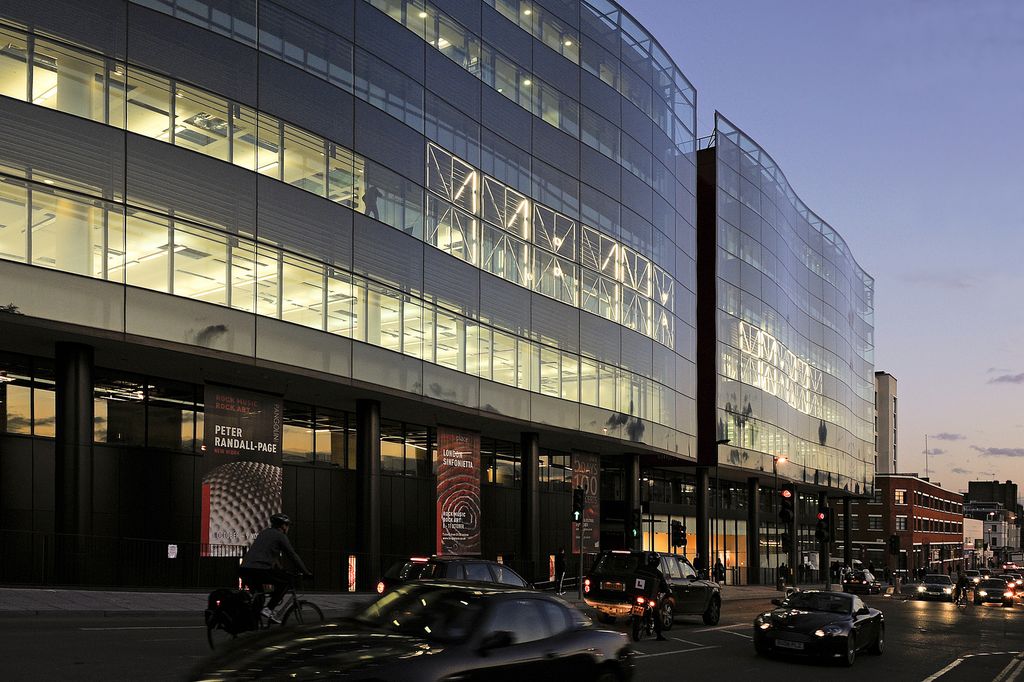 How can arts and business join hands in a meaningful way? In these days of austerity economics, a symbiotic relationship might be extremely valid. Business can pay for the arts, while the arts can provide inspiration, relaxation and succour in the workplace.

One person for whom this notion has become a reality, is property developer Peter Millican, who has introduced a new arts space to central London called King’s Place. It is something of a phenomenon; in the future, let’s hope it will not be unique.

Millican, who is from the north-east of England, is a veteran British property developer who also has a keen sense of philanthropy. He was as interested in providing a new concert hall for London as he was in building a new office block. But what he really wanted to do was to put both in the same building without subsidy; therefore, making commerce pay for culture.

In the midst is a vast, publicly accessible atrium with free, commercial art galleries, a café and restaurant. There is no entrance charge and it is not imperative to buy anything in order to enjoy its light spaces and canal waterfront.

The whole building enjoys a generous proportion of public-to-private space. Out of 500,000 sq ft, only 300,000 is let commercially. Estate agents tend to weep at such a ratio. Actually it was a brainwave. The building has been fully let and profitable since it opened, and is now a local landmark for meetings and more.

Kings Place also houses the first new public concert hall to be built in central London since the completion of the Barbican more than 25 years ago. Downstairs in the basement there are two auditoria: Hall One, which has 460 fixed seats, and Hall Two, which is a flexible performance and rehearsal space, and can seat around 200 people or take 300 people standing.

Hall One, which is built on the traditional “shoebox” double cube beloved by small concert halls, is lined with oak veneer made from one 500-year-old German oak. The tree provided almost an acre’s worth of veneer and was used for the walls, seat backs, columns, doors, desks and roof coffers. Since it opened, it has won a fistful of architectural awards.

Both Halls are used every night of the week for an eclectic programme encompassing folk, comedy and literary events, but is overwhelmingly the home of quality classical music. The intimate auditoria are home to a first-class orchestra, the Aurora, and regularly draw in performers of international status, such as the violinist Rachel Podger and the Bach keyboard master Niki Skuta.

King’s Place gets no subsidy, which is rather astonishing given that classical music, of all art forms, is always the one which is said to constantly need a helping-hand from the state. Here, everything is funded by the commercial purse.

In short, King’s Place is a brilliant fusion of office and orchestra. Commercial enterprise funds the arty stuff, which is not left to fend for itself in some giant lonely centre to which people must make dogged pilgrimages, but is positioned as a natural and accessible extension of the working day. If you buy online, you can attend most of concerts for less than a tenner. On any day. In good seats.

How did Millican achieve it? “Well, I do think mixed use is complicated,” admits the developer, “but if you get it right, it can offer a lot to a lot of people.” It is certainly the buzzword of much big urban architecture at the moment; from the Shard to the Heron building, most of the giant skyscrapers popping up in London have a carefully carved out commitment to public space as well as private enterprise.

Furthermore, King’s Place is not only accessible, it’s flexible. Different sorts of people successfully use it at different times of the day. This means Millican does not have to put up with the typical headache of the West End landlord, where auditoria lie empty and unprofitable during the hours of daylight; here, Hall One and Hall Two, plus the “breakout” rooms, are used for commercial conferences during the day.

And neither does he have the issue of unused space during the evening. As the office workers leave the building and head off towards the giant transport hub of King’s Cross St Pancras, people pour in to hear wonderful music, eat delicious food and generally enjoy the ambiance of an area of central London once written off as derelict.

Of course, Millican was lucky in choosing the derelict bit for his vision and he admits that in this he has been lucky. When he first assized the area, it was a dark, dismal stretch featuring prostitutes wandering past derelict buildings. Approval for either the Eurostar Terminal at St Pancras or the King’s Cross master plan had yet to happen. The land was, of course, extremely cheap, but because it was so notorious, the authorities were reluctant to allow Millican the right to build such a large building.

All arts chiefs across the country, particularly those still in receipt of government subsidy, should make a trip to King’s Place

Who on Earth would want to work at King’s Place? Well, The Guardian, then beginning to fidget in its ancient offices on nearby Farringdon Road, did – and that was the key. Network Rail and Logica followed. Now the area is an achingly hip place with Central St Martins art school nearby and some restaurants so chic they have a waiting list for tables of about a year.

“Development is risky,” smiles Millican, with the confidence of someone whose risk has indubitably paid off; after opening in 2008, he expects to break even in 2014-15. If his geography was good, his timing was even better. “If I had tried to do what I have done only two years later, it would have been very different.”

Could his magic work elsewhere? London theatres, for example, which are empty all day long. Could they become conference halls in the daytime? “The trouble about the Victorian playhouses is that they are absolutely built for purpose and have very little public space,” he says, musing on the issue.

Arts buildings created from scratch, he suggests, are much better candidates for commercial cross-fertilisation and, these days, this should be considered from the start. Equally, offices should consider perhaps integrating some form of arts space into their physical offering. “I don’t think that you can have a civilised society which does not sponsor the arts in some way,” says Millican.

Yet arts bodies, who already inhabit a structure and aren’t about to move any time soon, should not give up striving for commercial gain. The business is out there.

He cites London’s South Bank Centre, utterly revamped by Michael Lynch a few years ago and which now operates as a cultural hub indoors and a giant food court outdoors, on the south side of the Thames. The old gusty, deserted walkways have been replaced by a bustling parade of restaurants and marquees offering picnics, Indian street food, Chinese dim sum and the rest. Eating on the South Bank has become a destination in its own right and a vital commercial wing to boot.

You have to be daring, however. “The key is to get a critical mass, in order for it to work,” says Millican. Arts buildings cannot work in isolation. King’s Place is all the more attractive because of the restaurants now popping up alongside its glittering front; the South Bank is now somewhere to spend the whole day, thanks to its cluster of shops and diners.

Now that local councils seem rather loath to spend any money on their arts facilities, executives must be creative not only in their programmes, but should look at every possible area for financial growth. Millican points to Newcastle’s Live Theatre, which has quietly been investing in property nearby to rent out commercially. It’s a responsible thing to do and it could be a life-saver for the institution.

So business can be great for the arts. What about the other way round? Do people from The Guardian and Logica actually use King’s Place in the evening? Millican smiles at this. “Well, there is an element where people who work in a building all day long do want to get away from their office come the evening. But as this area develops and the surroundings change, I think more and more will use the facilities. Actually the number of people who work here and choose to stay on in the evening is growing.”

Anecdotally, I think he’s right; I have seen people in Network Rail jackets lounging around the atrium and the editor of The Guardian, a keen amateur pianist himself, is a regular attender at the concerts in Hall One.

It might be worth it for all arts chiefs across the country, particularly those still in receipt of government subsidy, to make a trip down to King’s Cross and pop in to take a look at Millican’s glittering success.

The Arts Council was introduced at a time when Britain was war-weary, rationed and in need of a treat. Yes, times are hard again, but possibly because we have had too many treats of late. Rather than bleating about hand-outs and wailing that councils do not ring-fence their arts budgets, but are slashing them as they are slashing everything else, arts supremos should start thinking about how private enterprise can and must step in, and take a leaf out of Millican’s rather impressive book.

Live musical performances
have added to the King’s Place repertoire