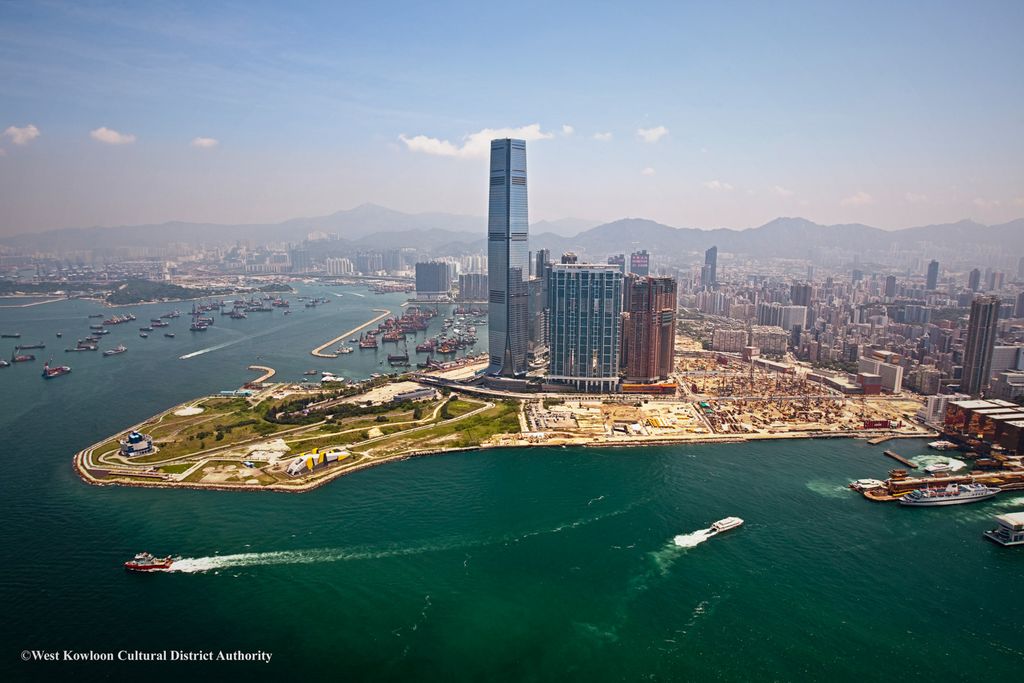 Lars would like to create arts partnerships with the computer game industry.

When Lars Nittve got a call from the chief secretary of Hong Kong asking him to run the city’s enormously ambitious new museum for visual culture, the seasoned art guru spent the first hour of the conversation saying no.

“I had no plans to head another museum, which I had been doing for the past 20 years,” he says. “My idea was to go back to basics – write, teach and maybe do some hands on curating – to have a different life than the deadline-chasing lifestyle it means to manage a museum.”

But by the end of the call he began to realise that, if the ambition of M+ in Hong Kong became reality, it would be a game changer in the Asian museum world.

“There were large resources behind the venture, without being a show-off project. It felt very well-conceived, and to once again take a risk, and leave your country and comfort zone felt alluring, so in the end I said yes,” says the Swede.

Although he was the founding director of Tate Modern in London, which opened its doors in 2000, building M+ from scratch is a new experience.

“I have never been part of creating something like this before. With Tate Modern, we had a 100-year-old institution behind us,” says Nittve, who also headed Louisiana Museum of Modern Art, outside Copenhagen, and Moderna Museet in Stockholm.

He singles out four main challenges in the build-up phase to the opening of the museum, which will be located in the 40-hectare West Kowloon Cultural District, a Foster + Partners designed cultural hub on one of Hong Kong’s urban shores. The first one was to put together a team and develop ideas leading to a more defined vision of what M+ is all about.

“You ask yourself questions such as in what ways do we look like the institutions that already exist and where are we different?”

This is closely connected with the second challenge, the one Nittve considers the most demanding – building a collection. “It is more definitive than anything else, including the museum building, which is easier to change. Hong Kong will have to live with the collection that we put together,” he says.

There are mixed feelings towards someone who comes from the outside and makes decisions, which I assume is a heritage from colonial times

The most important building block in this effort is the recent acquisition from Swiss collector Uli Sigg, where 1,463 works were donated and 47 purchased for HK$177 million. It is generally recognised as the world’s largest and most important collection of Chinese contemporary art from the 1970s to the 2000s.

“Basically all the major modern art museums in the world were founded with one or several major donations, so I started by contacting a number of large and relevant collectors who I thought might want to see their lifeworks end up in Asia. The challenge was to get them to consider this museum – that did not yet exist – as the given destination for such a donation,” Nittve says with a smile.

There may be two other major donations coming up and, together with the Sigg acquisition, they will make up the cornerstones of the M+ collection. The museum’s model is similar to the leading institutions around the world in that it’s built from the local to the global in concentric circles.
“Our core is Hong Kong, then comes China and Asia, and then the rest of the world. Over 90 per cent of the works are by Asian artists, so when we chose to purchase from afar, it’s a much more strategic decision. Why are we buying this Brazilian artist, for example? How does it relate to what we do and where we are?”

Intellectually, the former art critic does not consider it difficult to take a Hong Kong-China-Asia perspective, noting that perhaps it’s even easier to change the inside view on things as an outsider. To his aid, Nittve has brought in a mix of co-workers to create a good dynamic of local knowledge and outside perspective. Some 50 per cent of the curators are from Hong Kong, 25 per cent from the rest of China and Asia, and 25 per cent from the rest of the world.

“Of course, there are aspects of Chinese culture that I can’t understand, so you need to be able to trust others and be humble,” he says, adding that it is not entirely unproblematic to come from the West and head a major project in Hong Kong.

“On the one hand, there is an understanding that they don’t have people with my background and experience; on the other, there are mixed feelings towards someone who comes from the outside and makes decisions, which I assume is a heritage from colonial times.”

Another cultural barrier has been Hong Kong’s bureaucracy and political culture, which is dense, expansive and difficult to navigate, requiring Nittve to develop whole new set of skills.

The third major challenge is one that often gets a lot of attention – the construction of a building. Nittve notes that the house is important, but emphasises that it is a tool for connecting the audience with the content. He takes the Guggenheim in Bilbao as an example – it is a great architectural symbol, but not very good for showing art.

“The wrong way to do it is to first build a house and then realise that somebody must run it and after that realise that you need to fill it with something. There are many such examples, especially in the Asian museum boom. With M+ we took a lot of time and worked a great deal on the programme for the building before initiating an architectural competition,” he says.

Wise from previous experiences, Nittve and his team did not want to get a design that was finished before they had even talked with the architects, which is often the case in architectural competitions. In the selection process they therefore required the participating companies to present an early-concept design. They also held workshops with every team of architects to test them and learn how they worked with each other as well as how they handled the client and reacted to criticism and suggestions.

“We are asking for a building that will have a location as spectacular as the Sydney Opera House, but at the same time has a backdrop with skyscrapers that are not all beautiful,” he says. “The challenge is to create something that can stand up against the background while meeting the waterfront, which is a fantastic urban environment.”

The Swiss firm Herzog & de Meuron, whose portfolio includes Tate Modern and the Beijing National Stadium, ticked all the boxes. Despite the many world-class architects that participated in the competition the choice was easy.

“They proposed a building with an almost graphic feel and great confidence that stands up against the high-rise surroundings, and at the same time provides a wonderful view and has a close-to-perfect room structure,” enthuses Nittve.

Since M+ is a museum for visual culture, which includes design, architecture and moving image, as well as visual art, the building must be able to handle many different types of material. This means a variety of spaces within one single entity. Another important requirement is that it must be welcoming and democratic – this is a house for the people of Hong Kong.

“But relatively speaking, the building is the easiest part of the project. We have the financing and the location so it is really a question about making it fit into what we want to do. Big houses and museums are built all the time and we are working with very experienced people. To create a major collection in the same timeframe is a much more arduous task.”

So why does he think that museum buildings sometimes get more attention than their content? “The museum used to be synonymous with the building, but these days many artists do not even show spatial works. Paradoxically, however, as art is becoming less material, there is perhaps an even greater need for the building as a symbol for what we do,” he explains.

The fourth of Nittve’s major challenges is building an audience, which M+ has already started doing through its digital presence and various nomadic exhibitions, such as a recent outdoor installation of so-called inflatables – Mobile M+: Inflation!

He notes that even though M+ is located in a metropolis, it is different from London, New York or even Stockholm in the sense that, if you grew up there and have not travelled a lot, you have probably not seen a great deal of design or contemporary art.

“Hong Kong is a little bit like Stockholm in the 1960s and 70s when Moderna Museet broke new ground or New York and MOMA in the 1950s. Our work is a lot about creating and widening the perspective, but given our globalised world I expect it will go faster here than it did back then,” says Nittve.

And the interest is clearly there. When Nittve started his assignment everyone told him that Hong Kong is a cultural desert “where money is god and shopping the religion”. But the city now has an art fair, Art Basel Hong Kong, that attracted almost 70,000 visitors this year and the M+ inflatables exhibition drew 150,000 people despite awful weather. The local art economy has also developed enormously, and Hong Kong is now a key location for the big auction houses and international galleries.

“There are lots of other examples illustrating the potential if you do something that speaks to the hearts and minds of the people here. I am not the least worried about attracting large crowds to the museum,” he says.

They proposed a building with an almost graphic feel and great confidence that stands up against the high-rise surroundings, and at the same time provides a wonderful view and has a close-to-perfect room structure

Another aspect of reaching the community is partnerships with the private sector. Corporate-cultural collaborations, something Nittve has worked with extensively at his previous positions, are not very developed in Hong Kong, and in the case of M+ it is particularly sensitive.

“With the exception of the donations to the collection, M+ is entirely financed by the Hong Kong government, which if you include the land value is an investment of almost HK$120 billion,” he says, adding that there is reluctance about letting private partners, whose contributions will be on the margin of the total budget, free ride on this.

“But as we are moving forward, I believe it will be easier to partner with the corporate side and connect them with specific parts of a programme rather than, for example, the building. Collaborations with the private sector are often important financially speaking, but they are also a key link into society.”

There is still a way to go before Hong Kong is a cultural, as well as commercial, metropolis. But with the vision to create more than “just another art museum”, offering a “Hong Kong perspective with a global vision”, Nittve is taking an important step towards transforming the Asian museum scene.