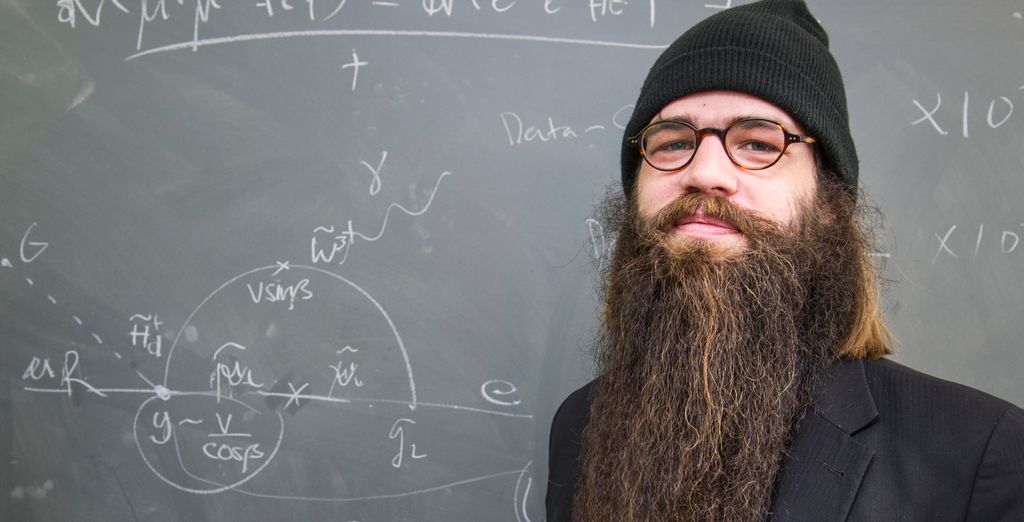 ART AND SCIENCE COLLIDE IN THE WAKE OF HIGGS BOSON

Skyped from Berlin, Julius Von Bismarck, the 28-year-old German conceptual and digital artist, describes himself as a “nerd and dyslexic”. The first helps him work; the second requires a focus on images rather than words.

He was the first 2012 resident artist in the Prix Ars Electronica Collide@CERN project at the gigantic scientific research establishment of Cern in Geneva, Switzerland. The three-month residency included a month with Ars Electronica’s Futurelab team in Linz, Austria, site of an annual digital arts festival. The first phase involved saturation in the world of science and high physics; the second developing ideas to become works.

Von Bismarck also recently worked in Ethiopia – and now he is trying to process vastly different experiences and settings: Geneva, site of inquiry into the origins of the universe; Addis Ababa where Homo sapiens emerged some 200,000 years ago. He left the residency with “30 years of ideas for work stored up”, but the word “unsure” recurs in conversation – mining ore could be a chore and inevitably, faced with the unknown, he doubts, rather like a recovery victim of “collision”.

That word is much used at Cern and applied to the meeting, interactions, discussion and exchanges between scientists and artists central to the residence project. Allusions to C. P. Snow’s two cultures of arts and science are inevitable, but used to imply that collision between the two cultures will open the doors of perception to both. Then, it is implied, the visions of the specialist scientific Spartans will intersect with those of the generalist Athenian artists: each will understand, appreciate and their work will grow.

Cannily the project, devised and organised at Cern by Ariene Koek, has few expectations of the process occurring between an artist and a scientist. Given space and freedom from external expectations, the participants will find their own drift, albeit shaped by the Cern setting. Nor is it the unrealistic expectation that the artist will produce, but Koek says: “This will take as long as it takes.”

The terms of residency are simple: for two months the artist lives and interacts at Cern, and is paid €10,000 – annualised, this is roughly 60 per cent of a new PhD scientist’s salary. From ten candidates, Von Bismarck chose Dr James Wells, a leading American theoretical physicist as his assigned partner. Wells calls this a form of speed dating. They met, Von Bismarck says, some 20 times over two months, often in the staff canteen, and they talked about science, philosophy of science, art and each other’s work. They came to understand each other’s processes: now there is talk of an art-project collaboration between them.

The buddy mechanism circumvented potential blocks caused by roles: Von Bismarck a guest, an alien or a tourist and Wells an authority on home ground or seer.

Von Bismarck acknowledges: “Sometimes I did feel like a freak. My long beard… being looked at. But then I noticed that many scientists also looked like freaks. And I am a geek and found other geeks there.”

So what happened in the meetings was something closer to exchange and suffusion, rather than collision.

The programme also permitted Von Bismarck to stage artistic events – in the lingo, “interventions”. In a one-and-ahalf-hour class, he imparted to a group of scientists all he had learned about art history in three years’ tertiary study. This was followed by art-making and master class discussion. He also took 30 scientists down into the dark of the Collider asking them to note what they saw. A Zen spirit of serious play prevailed.

Curiosity, philosophical and otherwise, a degree of mutual understanding and some ironic humour acted as bridges between them. Wells speaks with self-satirising disbelief of Von Bismarck’s can-do approach. “He painted pigeons in bright colours and released them above Venice and Copenhagen.” (Some Pigeons are More Equal than Others, Copenhagen, Venice 2012). But what about permission or bird rights?

Von Bismarck’s family includes a scientist grandfather and brother; he reads philosophy of science, but concedes that he barely understands Wells’ particle physics research or its mathematical language, but what matters is the sense of exploring hidden worlds.

A mural representing the Collider at Cern

To an extent each exists and works in different universes rather than cultures. Wells’ universe involves concepts with implications that are incommunicable in words and best understood only by colleagues. He operates with timescales that are opaque if not inconceivable to non-specialists. Translation deforms the concepts. Wells quotes Schopenhauer’s statement about scientific discovery: “Its significance will only emerge in the next generation, over time.” In the context of Wells’ work, this may be optimistic.

Von Bismarck’s own work is located in a corner of the arts universe that seems similarly opaque to the laity and seems detached from pre-modern art traditions. It’s courting the shock of the new and the now: in Punishment 1 (2010/11), Von Bismarck is photographed whipping an incoming tide, a snowy mountain and the base of the Statue of Liberty. Digitallybased works and performance art often eschew not just explanation, but the need for it, evoking despairing or angry wails of: “What’s it for?” and “Why?” Where art audiences react with anger to the incomprehensible or radially new, they react to the scientific equivalent with homage and awe.

Finally, the artworks are both public events and processes that have an extended life in video, newspaper, radio or TV representations. They cannot be possessed, held, exhibited or perhaps bought and sold; they are there and not there – the Higgs boson. Much digital art, installations and performance art fall outside the categories of durability and originals as opposed to copies that underlie Walter Benjamin’s The Work of Art in an Age of Mechanical Reproduction.

But, like Cern’s research and projects, Von Bismarck’s digital work is fuelled by capital and thus connections with its sources. Digital art uses technology, relies on specialist technological and other skills, and increasingly operates and is created internationally. So Von Bismarck needs sponsors who preferably don’t talk about “measureable outcomes” and are content not to own it.

Artists and others – accountants, hairdressers, schoolteachers – often talk about creativity which, we know, is as common as blood. Von Bismarck refers to Arthur Koestler’s sense of it being the convergence of seemingly disparate frames of reference resulting in a shift of consciousness. “My love is like a red, red rose” is the obvious, if hackneyed, example. And increasingly everyone is creative, from hairdressers to accountants.

But creativity exists in its evidence and this is unpredictable. The evidence is the work or insight. This may or may not be enabled by collision, juxtaposition or conversation.These may be personally stimulating, but not result in work or if work follows, its origins can’t be discerned. Only in bad movies do creative people, starving in their garrets, open their mouths, clutch their hair and then produce a masterpiece. The creative process is subtle; the connections to sources unclear and the uncomfortable fact is that effort does not guarantee quality.

Talking about the effect of the partnership, Wells is humble, sticking with what he knows – his own sense of self. Because of the interaction, he says, he increasingly needs to also address his work to smaller, more intimate groups and not only the broad congregation of physicists through their journals. The form that this might take and the effects on him, his work and his peers are unpredictable; now it’s an impulse, a nudging. If followed, it might or might not make him happier, but alone it won’t necessarily improve insight.

Von Bismarck is looking inward. He is aware of the new weight of new information and insight. It suggests new directions which is both exciting and scary. The residency has revealed new intellectual and imaginative possibilities, and with them come new demands.

The residency has also broken isolation, but again this is no guarantee of new art. Uncertainty is a condition of creation. There are no factors that can be managed to increase the likelihood of new creations that matter. There are obstacles that can be eliminated, though this will not ensure the emergence of new art. Ultimately arts sponsorships do a bit of both, although artists live with – and some enjoy – uncertainties and psychic risks of failure that would send your average “tough” businessman home screaming “Mummy!”

The design of the Collide@CERN sponsorship respects the principle of uncertainty as an unavoidable and even necessary element of the creative process. It is shaped by the reasonable notion that the sponsorship is likely to provoke new work and new insight.

The value of effective arts sponsorships is in financial and other forms of support and reward. The Collide@ CERN sponsorship is pure in that the funders expect no tangible benefit like increased sales, better working conditions or a prominence in their market. The Collide@CERN project meets the broad corporate goal of connecting with stakeholders; the arts and artists are one such group. If they matter it may be because they are a means of connecting with the moneyed or educated.

Private donors meet the costs of accommodating and feeding the artist at Cern, as well as the stipend; Cern bears those costs involved in the project’s management and indirect costs related to freeing scientists to participate in the arts project.

Koek would like the project to expand to have scientists in arts organisations. “It’s a logical extension,” she says. But for now the money does not exist. She would also like the project to be documented, essential in extending its life and thus its wider impact. But private sponsor dependence now prevents this. Still, as the Higgs boson discovery suggests, such artistic “collisions” can have incalculable power to permeate and change understandings. Business people are won’t to say dismissively: “If it can’t be measured, it doesn’t exist.” The project refutes this.